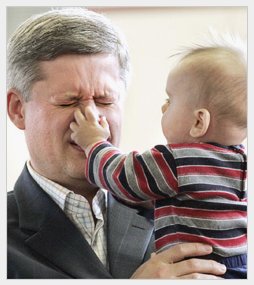 Why? To figure out how to sell Harper's day care plan to Canadians.

"When the thing arises on the drawing board, we'll be there," said Gwen Landolt."And in the meantime, we're doing what we can to educate the public and to lay the groundwork for controversy to come when the bill is brought forward."

Because really, who better to represent Harper's ideas to Canadians than a coalition of anti-abortion, anti-gay, anti-SSM religious bigots? I mean what could be more 'family' than that?

Posted by Alison at 4:05 am
Email ThisBlogThis!Share to TwitterShare to FacebookShare to Pinterest
Labels: Landolt

look. my husband's a cross-dresser, i'm a gay man trapped in a woman's body, and we paid millions to have a baby cloned (stephen harper's my cousin, we just took some of his kids dna).

we vote conservative because our child-molesting priest told us to.

yes, we want the cash because our church and the government keep taking it from us. if our young billy is to go to war in a few years alongside the u.s.a. then we want him wearing a really cool uniform. we'll use the cash to buy more flash cards for him, with pictures of hawks, tanks, money, aryans, and apple pie.

It's like reading the Canadian Franchise list of the Who's Who of the Paleocon fearmongers in the US. The ones voted most likely to home school their children so they can avoid all those nasty secular liberal cooties, and go on day trips to the ROM and the Tyrell to point out the earth is only 6,000 years old and evolution is icky.

You /bet/ they want that money to spend as they like, instead of being forced into spending their tax dollars on some socialistic secular day care centre available to well, everyone.

Hey, after this kind of piece in the press, you can't say Harper has a /secret/ agenda.

I am repeatedly surprised every time I see evidence that REAL Women still exists as a group. I remember them hanging out the Byfields and their ilk way back in the early nineties.

Damn, Bazz, but you have some 'ilky' connections.

One of your other ilky connections, Ezra Levant, is currently wetting himself (in a good way!) over Harper's nomination of Harper-supporter Gwyn Morgan to the Harper-created Public Appointments Commission. (and I definitely feel a post coming on here)
Got any good local dish?

Sounds like the Institute for Canadian Values, aka, a Focus on the Family wannabe, is a real "values" organization, huh?

Anti-everything with the exception of generating $$$ to contribute to further bigotry . . . . Wonderful folks, the "morally upright" . . . .