LifeSite is just pleased as punch that the Canadian Centre for Bio-Ethical Reform are driving trucks around Calgary this summer with 3 meter high photos of aborted fetuses posed next to a Canadian nickel plastered to their sides.
NatPost : "The truck comes out only on weekday mornings, when people are on their way to work and have less time to cause trouble."
Referring to CanCBR as a "Calgary-based group", NaPo explains :

"While this is the only mobile anti-abortion billboard in Canada according to the organization, similar trucks in the U.S. have been vandalized or shot at with paintball guns."

Similar trucks? Come on, NaPo. CanadianCBR is an off-shoot of the US Center for Bio-Ethical Reform who use exactly the same image on their trucks only with a US dime instead. Must have been quite the grisly photo shoot, fiddling about with little hands and feet and different coins under the hot photo lamps.
Whatever. They're making their point and they're making it badly, according to Calgary Bishop Fred Henry who withdrew his support from the organization explaining it "does more harm than good to the pro-life cause".
Not to mention their nonsense about abortion causing an 800% higher chance of breast cancer, citing the thoroughly discredited research of born-again British nutter Joel Brind.

Anyway LifeSite is pretty thrilled about the whole thing but then elsewhere on their website they make this statement :

"Contraception is NOT a solution to abortion, but rather part of the problem."

Right.
You're against abortions but cannot bring yourselves to support the only realistic method of preventing them. And you're against sex education in the schools too but you support the creepy fetusmobile driving slowly past those schools.
You're fucking nuts, is what you are.
So I'm guessing this fashion statement from China is completely out then ? 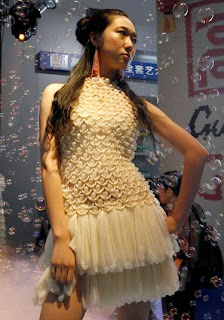 H/T to Red Jenny who found them - the dresses made entirely of condoms.
Photography - ClaroCortezIV
and JJ at Unrepentant Old Hippie who got to this first
via Holly Stick at Bread and Roses.
Posted by Alison at 7:44 am
Email ThisBlogThis!Share to TwitterShare to FacebookShare to Pinterest
Labels: abortion, LifeSite

When even a reactionary bigot like Fred Henry thinks you've gone too far, maybe it's time to find a new strategy...

Yes, they are nuts.

But that dress...is tres sheik, non?

Sick puppies is all I can think of for the top 'o the post.

The bottom half is quite intriguing though, that is as in a purely academic thought experiment approach -
ie: How to rub 'er the right way.

Errr, I mean that just in the interests of the aforementioned fashion statement context you understand.

Purely for the purpose of good taste, modesty and environmental concern.
After all there is a trade off vis a vis a shorter skirt against a waste of good rubber.

Aww the heck with it, take all 365 of them, melt them down to make a tire and call it a Goodyear.

Arto : Indeed and the reason I blogged it is the more publicity these guys get, the better.

I had to look up Mr Erl to find out who he was - Is he for Reale or a Trojan horse? CC gave him quite the ribbing ;-)

Tres tres Sheik, Q
Actually I think the dress is quite lovely and the skirt would probably feel fantastic - but oh the smell!

Yes, he was ribbed... for our pleasure.

And for his own good, for protection from disease.

BTeasles- you break out in blue splotches then go howling-at-the-moon insane.