At a barbecue this summer at Toronto Mayor Rob Ford's house, Steve lays out his hopes for a federal provincial GTA TeaCon sweep :

US Tea Party consultant Michael Prell, who bills himself as a "strategist for the Tea Party Patriots," has joined the campaign of Tim Hudak. (h/t Sabina Becker)

So how is Hudak's Ontario election campaign going? Oh, about as you would expect, as this Ontario Cons campaign flyer distributed across greater Toronto this last weekend shows : 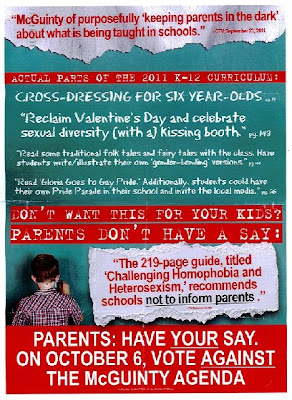 Quotes are lifted completely and misleadingly out of context, I'm sure you will not be surprised to learn, from Corporate Television Vehicle and the Toronto District School Board Curriculum Resource Guide. Repeat : Resource Guide.

G&M : "The sex-ed curriculum being taught in schools is the one that has been in place since 1998 when the previous Tory government introduced it, and remains unchanged, the Liberals said in a statement on Monday."

That teeny tiny type at the bottom of the campaign flyer?
Click to enlarge : "Authorized by the C.F.O. for the Ontario PC Party."

Fairy tales in school where the protagonist is no longer male? Outrageous!! Women should be either barefoot in the kitchen, or trapped helplessly by a dragon. They need to learn their place. If girl knights end up rescuing captured princes, what will the world come to?!!

And a kissing booth? On VALENTINES DAY?! This is completely unacceptable. The purpose of Valentines Day is for Hershey and Hallmark to make a bunch of money and get a massive dose of advertising imprinted onto young minds. How dare they interfere with this naturally right corporatization. Next thing you know, they'll be wanting to get rid of Santa Claus and the Easter Bunny!!
[/sarc]

On the other hand, having an informed discussion with parents on these topics would be a wonderful idea. But this piece of work is not that. It seems that with polls as they are three days before the vote, the PCs panicked and are resorting to fear mongering.

From Toronto Standard fact-checking link above:

Kissing booth?
"Alas not. The “kissing booth” described wasn’t really a kissing booth, and it certainly wasn’t for six-year olds. At a high-school, students put kiss-shaped stamps on each others’ cheeks and handed out chocolate. What’s more, this isn’t a rigid curriculum item, but a suggestion based on a case study."

Their fixation on sex as a weapon for control is extremely creepy. The fact that they are so invested in youth sexuality takes the creepiness to another level.

I heard a documentary last week on CBC where one woman interviewed, I'm not sure if she was a sociologist or a front line worker, said that 1 in 6 men commit some kind of rape. My initial reaction was to think, "no way" but upon reflection it actually does make sense. Hard to prove since the majority of sex crimes are unreported.