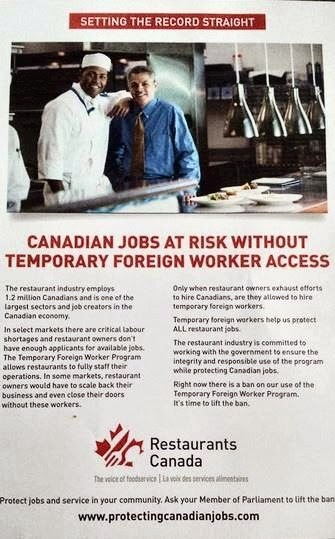 So if I understand the argument correctly, Restaurants Canada members employ 1.1 million workers of which TFWs only comprise 2% - a tiny fraction and certainly not enough to impact Canadian unemployment - but if restaurants can't have them they'll be forced to "scale back their business and even close their doors".
Ergo, TFWs are protecting Canadians' jobs!  Got it.

Protectingcanadianjobs.com, sponsor of the flyer at left which is also a petition to MPs, is brought to you courtesy of Smithcom, "a boutique communications firm dedicated to reputation management."
h/t NTFW

Smithcom's President "was instrumental in driving the growth of Hill and Knowlton in its inception in Canada and then founded and led Fleishman-Hillard."

I think Restaurants Canada, formerly CRFA, would have benefited from Smithcom's market expertise a little sooner - perhaps sometime before Canadian workers were being denied work , or being laid off and replaced by a 926% increase in accommodation and food services TFWs since the Cons came to power.

In case you're wondering who the two guys in the Restaurants Canada flyer/petition up top are, they are an "African chef and a Hispanic businessman" featured on a St. Louis Missouri University website for a course in Dietetics.
The same photo is used at Restaurant Canada's US lobby counterpart, the National Restaurant Association aka "The Other NRA" - a $680 billion industry representing KFC, McDonald’s, Starbucks, Taco Bell, etc. They have been sending petitions like the one above to members of Congress and threatening closures if they can't get more TFWs since at least the year 2000.

Both orgs have lobbied to cap the minimum wage for all workers.

The NRA was busted by the NYTimes last month for circulating a petition against raising the US minimum wage to $10.10 an hour that was fronted by an unwitting Nobel economist and distributed under his name. It was then signed by over 500 prominent economists and released to the media with nary a mention of the NRA.

In Canada, slide #20 of a powerpoint presentation by the VP of CRFA/Restaurants Canada  boasted :

"Due to CRFA’s lobbying efforts, Ontario froze the minimum wage in 2011 - saving the industry $266 million."


"The Conservative government’s overhaul of the temporary foreign worker program is on a collision course with its ambitious plans to sign trade deals that would allow more foreign workers to enter Canada hassle-free.

The final text of the much-vaunted Canada-European Union free trade agreement (CETA) is expected to include a list of occupations that can be fast-tracked into Canada and would allow European firms to bring European workers into Canada through inter-company transfers, with reciprocity for Canadian firms.

The Conservative government has described the deal’s provisions for temporary entry of labour as “the most ambitious ever in a free trade agreement.”

Temporary entry of labour the most ambitious ever in a free trade agreement.
Awesome.

Fabulous research. Now if only there was some way to get this on the front page of every newspaper in Canada that should be doing this kind of investigative reporting.

Will McDonalds Canada be signing the petition?

McDonald's foreign workers call it 'slavery': Foreign workers recruited from Belize are accusing McDonald’s Canada of treating them like "slaves," by effectively forcing them to share an expensive apartment – then deducting almost half their take-home pay as rent.
http://www.cbc.ca/news/canada/edmonton/mcdonald-s-foreign-workers-call-it-slavery-1.2612659

When tweeted, your title causes a link to nowhere; which I fix by putting [dot] in place of the .

Inter-company transfers was what the Royal Bank used to bring in IT workers from India last year.

Aw shucks, Gloat, *blush*
There's a bit more in the middle of the post now about NRA and CRFA success in capping the minimum wage that I left out when I posted.

Also ... Newfoundland Labrador has half a million people and unemployment is 13.7%. Why do Timmy's, Subway, and McD's all need TFWs for Gander and St John's?

Holly[space]Stick: And I thank you for whatever mysterious clever twitterati thing you have done. ;-)

Anon : Yes. According to the G&M :
"Labour Market Opinion (LMO) is a screening process by Employment and Social Development Canada that is meant to ensure an employer has first exhausted all local options to find a Canadian. However, nearly two-thirds of all temporary foreign workers do not need an LMO. Inter-company staff exchanges or workers brought in under trade deals like the North American Free Trade Agreement are exempt from the LMO process."

Labour mobility is always the sticking point with these FTAs. The theory says that labour ought to be as unfettered as financial capital and able to flock to the best labour markets, not the worst ones. The EU is set up like that so that workers can move about and trade their labour where they see fit. Canada's approach is not like that and constructed to solely benefit the profit making of business owners by indenturing workers to their companies. We should start calling it Canada's Slavery Program. TFW doesn't cut it.

Boris : I'm reading the 2012 Metcalf Foundation report "Made in Canada".
Yes, there's a deliberate legal construct for this slavery program - an intersection of provincial labour laws and federal immigration law.
Example : Work permits can forbid workers from taking language and job skills courses after working hours.
Seriously? WTF is the purpose of that - other than keeping them enslaved?

Canadians need to get ANGRY about this. They need to STAY ANGRY about this too. We're often to nice, too Canadian to stay angry, but we need to. The behaviour of these companies that are abusing the TFWP is a betrayal to Canadians and we need to remind them of this. Boycott McDonald's, Tim Horton's, and any other company until they publicly renounce the program and offer a sincere apology to CANADIANS.

Thanks for offering clarity on this subject.

Alison, the Climenhaga pieces is excellent, especially this line:

"And remember, the Canadian employees we’re talking about are people like our own children!"

It's high and low skilled jobs that are under threat, basically any Canadian worker who isn't an owner or executive is in danger of being replaced by a TFW slave. It really doesn't matter if your a franchise owner of some fast food chain or an VP at a major bank, you belong to a class that gives the "right" to turn your workers into chattel. The psychology behind this is right out of the Stanford Prison Experiments. Your chip-shop owner is on track to gain the power control their tiny workforce with the power of a dictator. It turns older Canadians against the "ungrateful" youth, their own children and future.

It's fucking sick, and if the rest of us don't consolidate and do something, things will just worse.

Another point: This has nothing to do with conventional economic policy or needs. There's no appreciation of effects on GDP, job growth, and other indicators of sound and principled economics. This is naked abuse of other human beings, deliberate and thuggish fascism designed to stratify Canadian society into haves and slaves, full stop.

GREAT article. Ought to be reprinted in newspapers around the country. Might be good if it were sent on as a letter to the editor in all the Canadian newspapers.

Its funny when employers say they would have to close their doors if they can't have poorly paid workers. What they are in effect saying is they want workers to subsidize their businesses. So here we go. Employers who can't run a business want their workers, who make less than the poverty level, have to help them stay in business.

Well in a free market economy, capitalist economy, which all of these guys say they support actually want a form of welfare. Its like cotton plantations saying they needed to keep slaves so they would be economically viable.

This isn't working for anyone but the employers. It isn't helping the country because when workers make less than what is considered "poverty level" their children become further and further impoverished: i.e. insufficient food, inadequate housing and clothing--this is Canada and it freezes; inadequate dental care because its not free, inadequate medical care because physio, meds, etc. are not free.

Well this is lovely - Jason Kenney literally running away from CBC reporter's questions about an alleged exploitation/extortion/fraud TFW case that was reported to CBSA 9 months ago by an immigration lawyer yet the company is still advertising for more workers. 2nd time this has happened! Later JK sent CBC an email blaming the Libs 8 years ago. Ha!

Thank you, eaf, Cameron, Boris, very much for your insightful comments. Busy day but will post more on this tomorrow.
The Smithcom ad/petition linked in the post has over 2,000 signatures - nearly three-quarters from Alberta but only 50 from Ontario.

Its like cotton plantations saying they needed to keep slaves so they would be economically viable.

At work today I was thinking ... what the Cons are doing here - rubberstamping a process almost entirely controlled from start to hideous finish by the businesses making TFW requests - is privatizing immigration.

I think Glen McGregor at the Ottawa Citizen is interested in the used of stock photos. He's written about them before.