A community torn apart by LNG and pipeline politics.
A mayor who sent a letter to the Canadian Environmental Assessment Agency confirming opposition to the PacificNorthWest LNG plant on Lelu Island in accordance with a community vote. He then sent another letter eight days later retracting the first letter and replacing it with one of conditional support.
The mayor and his brother are VP and CEO of Eagle Spirit Energy FN pipeline company backed by Aquilini Group, donors of $1.2 million to the BC Liberal Party.
Aquilini has pledged financing to Eagle Spirit on condition of securing First Nations consent to a pipeline route to nearby Grassy Point, future LNG site.
On June 3 2016 Christy Clark announced an FN vote supporting the LNG project.

A 2014 report by PNW LNG suggests initial contact with Lax Kw’alaams occurred in December 2012. But at least six months prior, Petronas had already earmarked Lelu Island for its plant and signed a feasibility agreement with the Prince Rupert Port Authority.

Despite this mounting pressure, elected and hereditary leaders remained relatively united in their opposition to LNG development on Lelu Island — until a new mayor and council were elected in November 2015.

At first, the newly elected leaders maintained the community’s position. Mayor John Helin even submitted a letter to the CEAA reiterating the band’s rejection of the benefit deal on March 7, 2016.

But eight days later, in a move that hereditary leaders call a betrayal, Helin submitted a second letter to the CEAA that contradicted his earlier letter and offered conditional support for a project. The letter was dated March 15, when several elected councillors were away on an annual kelp-gathering trip on Digby Island.

Community members in Lax Kw’alaams were shocked. According to Smith, “the last time we had a band meeting was in a previous administration,” before Helin’s November election.

The Lax Kw’alaams letter of March 15, incorrectly dated 2015, was filed with the Canadian Environmental Assessment Agency four days after the March 11 deadline for comments on a draft report on the terminal that found the project would increase greenhouse gases significantly and harm porpoise, but not harm salmon.

The letter, signed by elected mayor John Helin, retracts an initial letter to CEAA dated March 7, in which Helin had said the Lax Kw’alaams “continue to oppose the project in its current form,” in particular locating a liquefied natural gas facility on Lelu Island adjacent to Flora Bank over concerns of harm it could cause to fish habitat

The new letter replaces a lengthy series of concerns, questions and recommendations in the first letter with two “legally-binding” provisions that Helin said will be needed to gain support of the Lax Kw’alaams for the project.

Mayor John Helin is vice president and his brother Calvin is president of Eagle Spirit Energy Holdings, founded in 2012 to establish a First Nations Energy Corridor across northern British Columbia.

Luigi Aquilini, the billionaire patriarch of the Aquilini Investment Group ... was in attendance at the launch event in Vancouver, and said his company would arrange funding for the project if Eagle Spirit is able to secure buy-in from First Nations along the route.

The Aquilini Group has donated $1.2 million to the BC Liberals


Calvin Helin’s Eagle Spirit Energy confirmed that it has something rival oil pipeline projects do not: consent from all the First Nations chiefs along the route of an energy corridor from Alberta to the Pacific Coast. 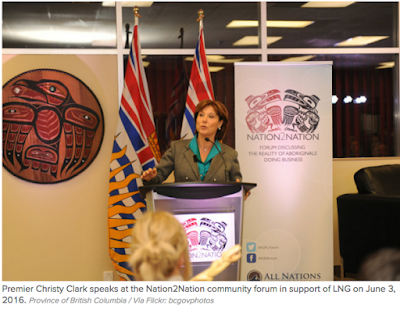 Buzzfeed : In Spite Of What B.C.’s Premier Says, There’s No Evidence This First Nation Voted In Favour Of A Major Pipeline June 24 2016

“The Lax Kw’alaams voted massively in favour of supporting LNG, with some conditions,” Clark said.

However, an investigation by Discourse Media, which sent two reporters to Lax Kw’alaams, suggests that no vote in favour of the project ever occurred.


But it is the federal government that now holds the pen on whether or not to let Petronas, the state-owed Malaysian oil company that is the key investor in PNW LNG, build its project on Lelu Island. If the Discourse Media investigation isn't proof negative of the corrosive, divisive, opaque and utterly bankrupt nature of how resource development gets done in Canada's so-called Reconciliation age, I don't know what else is.

Yet on Monday, when six federal cabinet ministers announced a wholesale review of the rules for approving major resource projects, they stuck to the Trudeau government's line that pipeline proposals already in process when the Liberals were elected will not be sent back to the drawing board, but will be reviewed according to the rules set by the Harper regime.

This is a confounding decision, because part of the reason Trudeau & Co got elected in the first place is because Harper's major project review process was -- and remains -- rotten to the core.

Petronas will return when SiteC is built. Meantime all of this is just about Christy Clark bullshitting her way to re-election on fairytales.

P.S. The "Energy Corridor" idea is interesting though.

I don't know what the BC government is doing. First Nations don't just roll over. Generally, First Nations change how they fight, and where, depending on circumstances.
If Clark thinks she can shortcut the first fight, the fight for public opinion, then the First Nations governments there will gladly get this project held up in the courts. They'll get this held up indefinitely until the question of consultation is answered. And the likelihood is they'll win, there.
And they'll also fight it out on the land itself, too, blockading any and all throughways to the site, if necessary.
It doesn't take very long for First Nations to raise funding to fund their opposition. First Nations have been fighting for a very long time, and know exactly how to fight the government.
The government is on a timetable, before the next election. All First Nations have to do is wait and see.

You see, the problem is, the BC government doesn't understand First Nations. In the grand scheme of things, First Nations peoples aren't beholden to their chiefs and councils. There's not much obey in First Nations bones, which includes their own ostensible leaders.
Instead, if the BC government were serious about consultation, they'd have their people in the community, trying to convince the families themselves. Chief and councils are a white man's construct. First Nations still remain more family based in their decision making. And they follow the elders guidance. If you haven't convinced the families, and you haven't swayed the elders, then you've got no chance at convincing the First Nations community as a whole.