The Emperor has no shirt

Today, after sending out his new rookie Minister of Democratic Institutions to deliver the news his electoral reform promise was officially dead , Justin Trudeau stood in the HoC and said:

"As people in this House know, I have long preferred preferential ballot..."


"First of all on first-past-the-post, you’re absolutely right that it doesn’t matter if someone gets 31 percent of the vote, and the other parties only get you know 26 and 20 percent, and it’s all divided up, then they get to represent one 100 percent of the community, and that’s why I entirely agree that it has to move beyond first past the post.

“But how we do that is very important. I personally and the Liberal Party has adopted a format of a preferential ballot, where the person who would be elected gets more than 50 percent of the vote in the community, so they represent the majority of the community.

I think that a ranked ballot, a preferential ballot, is a strong way of changing our electoral system that I’ve been pushing and I’ve committed to look at once we form government.”

The problem with preferential or ranked ballot, also known as Alternative Vote, is that it's the only electoral system worse for voters than what we have now. As the second party of choice for supporters of the Cons, NDP, and Greens, the Liberal Party would be the obvious benefactor of a ranked ballot in a single member riding and would likely form the government in perpetuity. This point was driven home by expert after expert to the ERRE committee, some 88% of them, despite hopeful entreaties by the Liberal MPs to the 4% of experts they could cobble together in support of it.

We had some earlier inkling the choice would be between preferential ballot or nothing.

On December 1 2016 after Monsef's math meltdown, the four Liberal MPs on the ERRE committee announced at their presser that they believed any change to our electoral system would be too "radical". Liberal Chair Francis Scarpaleggia explained :

"Perhaps if we chose preferential ranked ballot we could do that tomorrow.

Yes, the PM made that commitment but a lot of people thought he was talking about a ranked ballot. You could do a ranked ballot like that. [Snaps fingers] Nobody wants ranked ballot, so what does that leave us?"

Two weeks later on December 13 2016, an ERRE motion was up for a vote in the House. Approved by Scarpaleggia, it proposed to add the committee's own previous electoral reform e-consultation, which included specific questions on voting systems preferences including proportional representation, on to the Liberals absurdly vague and misdirecting MyDemocracy VoxPops quiz :

Five minutes later, all 173 Liberal MPs in the House had unanimously voted it down, including the four Liberals on the ERRE committee - Ruby Sahota, John Aldag, Matt DeCourcey, and Sherry Romanado, plus the Liberal Chair Francis Scarpaleggia - while the Cons, NDP, Bloc, and Green all voted in favour.
Final vote : 173 No to 131 Yea.    Justin Trudeau was not present.

Yet out on the hustings the past few weeks, he continued to reassure us that he had stated in 2015 that "our electoral system is broken", alongside a promise to make that election the last one under First Past the Post, and he was fully committed to keeping that promise.

So it looks like this was just a vote-grabbing campaign promise borrowed from the NDP and Green platforms to outflank them when the Libs were the third party in the House.
Vote strategically for us this one last time, they said, and we'll make sure you never have to vote strategically again. Desperate to ditch Harper and excited at the prospect of an end to cynical party politics, Canadians did.
When the Liberals got a majority in 2015, it looked like they could both keep that promise and control of parliament as long as electoral reform was restricted to their preferred preferential or ranked ballot option, but when that was no longer a credible choice, they scuttled the whole thing.

I wonder if they'll promise it all over again in 2019. This page below is still up on the Liberal Party website. 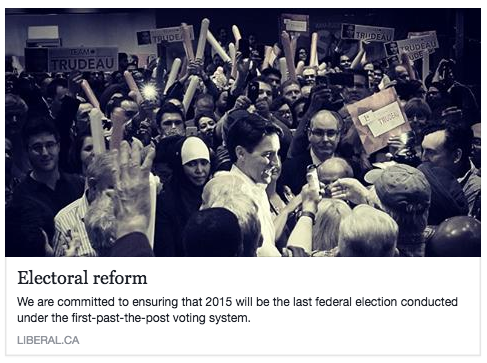 Excellent satire piece from Andrew Coyne: It’s not the Liberals’ fault for lying about electoral reform, it’s yours for believing them.


And congrats to Liberal ERRE committee obstructionists Matt DeCourcey and Sherry Romanado on your recent appointments as parliamentary secretaries at an additional $16,800 a year.

Interestingly enough, Trudeau also mislead the people he was speaking with when he stated that the Liberal party supports a preferential ballot or ranked ballot form of voting system.

AND BE IT FURTHER RESOLVED THAT immediately after the next election, an all-Party process be instituted, involving expert assistance and citizen participation, to report to Parliament within 12 months with recommendations for electoral reforms including, without limitation, a preferential ballot and/or a form of proportional representation, to represent Canadians more fairly and serve Canada better."

So Trudeau was already lying about the Liberal Party's actual position to his preferred option.

Agree with your analysis - when the Liberal Party didn't get the AV result they wanted, they abandoned the idea of electoral reform altogether. If this doesn't clearly show the whole point of parties is just to get and stay elected. Where are the principled Lib MPs who ran for office on electoral reform? It's like they get to ottawa and lose all sense of the point of being our MPs - just like the Libs who ran on fighting the Kinder Morgan pipeline but now support it.

"it’s not the lack of electoral change that is going to hurt Trudeau with Canadians. It’s the sense that he was lying and scheming to get the kind of electoral system he wanted."

It was not sunny ways, it was not realchange - it was the same cynical politics he claimed to be against. Trudeau has been shown to be same old Liberals with a better marketing scheme.


He lost me at "social licence."

Did you see this? http://individual.utoronto.ca/loewen/Electoral_Reform_files/KG_data_Feb%206.pdf

Boris : I'm guessing your link means you and I continue to disagree on both the integrity and efficacy of a survey composed of scare questions like :
“Ballots should be as simple as possible so that everybody understands how to vote OR ballots should allow everybody to express their preferences in detail?”, and
“There should be parties in Parliament that represent the views of all Canadians, even if some are radical or extreme.”
alongside other qualifiers against any change like "costs more", “takes longer for government to get things done,” is “less clear who is accountable,” and “takes longer to count the ballots.”

Note there were no such qualifiers against maintaining the status quo. A pox on their bullshit survey.

Had Trudeau not just been on the con, the money spent on what he called "a fun little questionnaire", and the $4M backing it, could have been used instead to educate voters on how proportional representation has enabled other countries in the world to achieve national daycare, free university tuition, gender equity in government, prison reform, credible climate policies - all the progress we can't achieve with our current wild two party policy swings from one 10 year fake majority to the next.

Heh. I'm not defending the current response from the government. I was happy to deviate from the narrative last year, but what's happened now is bullshit and they deserve everything they're getting right now. It's a clear lie and everyone is right to be pissed.

Still, the survey itself? I'm deferring to my peers on that one. Not agreeing nor disagreeing. If the experts on this come out and call it bullshit, then I'm happy to agree with them. I posted the link because I think the data ought to be public and all parts of the methodology be clearly stated.

Boris : And then I rudely jumped down your throat for providing that link!
Yes, agree data should be public but I think although not sure that VoxPopLabs owns it and so far is making it available only to to PCO who commissioned it. I'm surprised your peers aren't appalled.

I think many of us, despite numerous warning signs and especially the behaviour of Libs on the ERRE committee, hoped that somehow there was some good faith at the back of all this. JT continued to pledge his good faith up to two weeks ago and the appointment of Karina Gould, an electoral reform advocate, to the file held that door open a little longer. Now she stands in the HoC with the rest of them and says the status quo is just fine for Canadians.