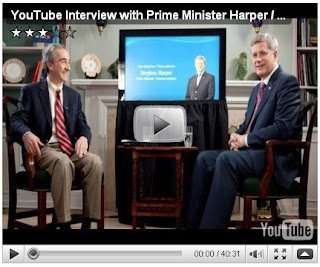 So y'all recall the hype ...
Steve! Live and interactive and unrehearsed!
It's your interview with Steve! Ask him your questions and vote 'em up on youtube!
Steve will have no idea beforehand what wild questions will be thrown at him.
Pick a card, any card...
.
So we all troop over to Kady's at CBC at the appointed hour to enjoy a little live blogging of this daring and unlikely foray into new media and we stare at a black screen for oh, an hour or so, waiting.
Steve appears to have prorogued youtube.
.
Eventually word comes down from the google gods - It will not be interactive. It is already pretaped, transcripts will be delivered to the real media ahead of time, and Youtube of same to be trundled along some time later.
.
When it finally arrives, it's a fireside chat beside a monitor instead of a fire, it's a townhall without people, it's question period without opposition. It is the perfect medium for Steve.
.
Transcript and Youtube
.
Posted by Alison at 11:03 pm
Email ThisBlogThis!Share to TwitterShare to FacebookShare to Pinterest
Labels: social media, Stephen Harper, Youtube

A very good assessment of the whole youtube-op. What an Asshole.