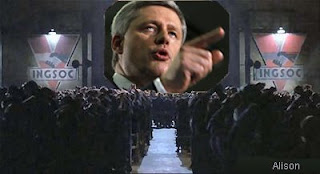 "At Foreign Affairs, the past year has seen the entire division focused on women's rights and gender equality eliminated.

In Pakistan and Kenya, two countries where women's rights violations and violence against women are profound and systemic, CIDA has cut funds that were explicitly dedicated to gender equality. In Canada, Match International, the only international development organization devoted specifically to women's equality, has lost its funding.

Within CIDA, there is a noticeable retreat from gender equality work. Staff have recommended to NGOs that they remove the words "gender equality" from their proposal if they want a chance at funding."

To be filed alongside the 11 womens programs eliminated in the past few weeks.
.
Posted by Alison at 4:32 am
Email ThisBlogThis!Share to TwitterShare to FacebookShare to Pinterest
Labels: CIDA, DFAIT, Feminism, Foreign Affairs, G8, gender equality, Stephen Harper

At Foreign Affairs, the past year has seen the entire division focused on women's rights and gender equality eliminated.

Embassy Mag authors Betty Plewes, former CEO of the Canadian Council for International Co-operation, and Joanna Kerr, incoming CEO of ActionAid, wrote that Foreign Affairs had four staff members and a budget "focused on women's rights and gender equality" and that it was eliminated "this past year".

If correct, this was news to me and I had not seen it reported elsewhere before.

Alison, whatever would I do without you and your intrepid reportage? Thanks for filling me in.