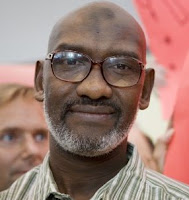 In defiance of a UN edict making it illegal to hire Abousfian Abdelrazik and to put pressure on our government to get him off that 1267 terrorist blacklist, the Canadian Labour Congress will hire Abdelrazik for a week, while the Canadian Union of Postal Workers and the International Association of Machinists will each hire him for a day. They are hiring him to tell his story, which will presumably include his being kept an exile inside his own country.

The Canadian government froze his assets in accordance with the UN list earlier this year, although they are permitting him to have an allowance from it, but he is still not permitted to work.

Here, by the way, is what the UN Security Council 1267 page has on Abdelrazik. Good grief. Foreign Affairs Minister Lawrence Cannon maintains it's up to Abdelrazik to get himself off the list, although no one has yet succeeded in getting off it without the help of their government.

After Abdelrazik was arrested in Sudan at the bequest of the CSIS in 2003, he was imprisoned for twenty months during which time he was beaten and tortured and later interrogated by two CSIS agents. Abdelrazik says he also remembers being questioned in Sudan by Foreign Affairs parliamentary secretary Deepak Obhrai, who questioned him about Osama bin Laden and what he thought of Israel.