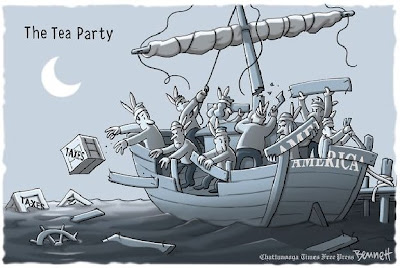 The tea partiers are only the end users, writes Zach Carter.

And then there's the media connection :

"They even have an unofficial partnership with Fox News, hosting conservative Fox personalities at their rallies, which are, in turn, promoted by Fox programming. Glenn Beck is even featured in advertisements and fundraising pitches for FreedomWorks."

"Meanwhile, living in splendour befitting kings, the Koch brothers quietly supervise an incoherently angry army that promises to gut what’s left of benefits for the poor while adding to the bonanza of billionaires."

"Today is the first election in American history in which corporations have been allowed to spend their own money to buy political favours."

How'd that work out?
.
Posted by Alison at 10:50 pm
Email ThisBlogThis!Share to TwitterShare to FacebookShare to Pinterest
Labels: rightwing media, separation of corporation and state, tea party, US election