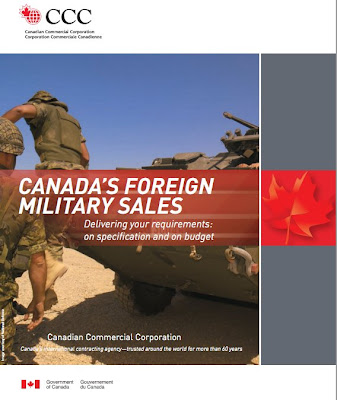 "There is no better trade show for defence equipment than a military mission."
~ Marc Whittingham, CEO of the Canadian Commercial Corporation, the crown corporation that acts as Canada's global military sales agency.

But just in case demonstrations of Canadian military equipment against the 90% civilian casualties in Afghanistan and Iraq are insufficiently compelling, the publicly funded CCC also rents a trailer with Export Development Canada at the big yearly CANSEC arms dealer trade show, which is where Embassy Mag caught up with its enthusiastically entrepreneurial CEO.


"You wouldn't know it from the lack of news coverage, but the Canadian Commercial Corporation has been transformed from a low-profile Canadian intermediary agency to a major player in promoting Canadian global arms sales.

The Crown corporation, often referred to simply as CCC, is best known for its primary job, selling Canadian military technology to the US Department of Defense under the 1956 US Defence Production Sharing Agreement, which today works out to about $1.4-billion worth of product flowing south.

But in the last few years, as the US defence industry began cooling after years of growth, CCC began talking to foreign governments about whether it was feasible for them to fill what was seen as a yawning gap by emulating some of the actions of the US defence department's Foreign Military Sales program.

The answer was a resounding "yes," and CCC realized it was sitting on a lucrative market. Now, Canadian defence contractors say they are increasingly turning to CCC to help them sell their technology to foreign militaries, and CCC is looking at $10.3 billion in contracts for 2010-11."

Apparently the yearly US Foreign Military Sales in arms is $35 billion, but world demand on them is $50 billion so a combination of $15.6 million per year of tax dollars plus CCC's sales commissions filled that "yawning gap" in making the world a better place for arms dealers.

According to CCC's 2010 annual report : "CCC charges fees for service only on its non-DPSA transactions, as its DPSA transactions are funded through parliamentary appropriations" - meaning that you and I are underwriting their fees on contracts with the US military, contracts which account for 80% of their business.
The CCC Corporate Plan 2010/2011 to 2014/2015 notes the "CCC manages between $1 billion and $1.7 billion annually with the U.S. DoD."


"We are Canada's global defence sales agency. And so we then moved from being an organization that was largely reactive to Canadian industry ­and we would have done, and have done certain deals in defence ­but we didn't have a proactive strategy ourselves, internally, that said we need a business development capability ... we have a business line dedicated to that now. We are small and nimble, and we are able to charge a smaller fee, obviously, for being a Canadian government element within a transaction."


We have a vice-president of business development and sales, a director of global defence sales. Our board of directors is very enthusiastic about it."

Back to the CCC Corporate Plan :

The Corporation’s two business lines are structured to support Canadian companies contracting into the defence sector, primarily with the United States, and into emerging and developing country markets.

According to the Stockholm International Peace Institute, global military expenditure in 2008 was estimated to be $1.46 trillion USD. This represented a 45% increase from 1999.

Major spending was mainly due to : foreign policy objectives, including the War on Terror; real or perceived threats; armed conflict; and policies contributing to multilateral peacekeeping operations.

From time to time the CCC website site presents a success story, like a $2B DND and Bombadier joint-procurement deal to provide the Kingdom of Saudi Arabia’s Royal Saudi Air Force with a "program for Aviation and Technical Training".

And above a truly lovely photo of a sunny backlit forest :   Corporate Social Responsibility


"At CCC, we commit to operating in an environmentally, socially, and ethically responsible manner, and to respect Canada's international commitments..."

"At CCC, we commit to operating in an environmentally, socially, and ethically responsible manner, and to respect Canada's international commitments..."


"A socially and ethically responsible manner". Kind of like killing innocents with honourable intentions.