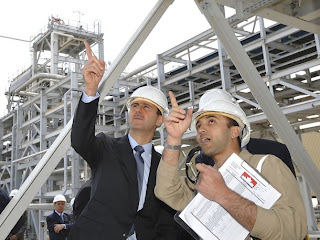 Foreign Affairs Minister John Baird announced on May 24 that Canada would be banning all further arms exports to Syria, as well as banning 25 senior members of the Syrian government from visiting Canada, should they have any desire to visit the country that is its third largest direct investor.
Baird's statement was made in response to reports that more than 1,000 demonstrators in Syria have been killed on the orders of Syrian President Bashar al-Assad, pictured here on the left touring Suncor's $1.2 billion Ebla Natural Gas Plant in Syria a year ago.


"The fact is that, on a per-barrel basis, it’s much more expensive to produce a barrel of oil synthetic crude oil from oil sands than to produce a barrel of conventional oil or gas in either Syria or Libya. In Syria, now that we are producing natural gas, the operation will generate positive cash flow for the company. In Libya we have significantly reduced the funding that the country requires, and as we learn more about specific opportunities, we have realized that they come in relatively small investments with strong returns. So these foreign operations can help provide the near-term cash flow and return on capital needed to invest in long-term growth in the oil sands."

Suncor CEO Rick George in early May : "So what I would say is I think it's in everybody's interest...that we keep that facility up and running."
So there ya go. Our home-grown "ethical oil", as lauded by Environment Minister Peter Kent and Ezra Levant in his book of the same name, is financed in part by making a quick buck in the "blood oil" states of Libya and Syria.
.
Update : Re link above to "third largest direct investor"
On Aug. 11, 2011, the Government of Canada Canada-Syria Relations webpage was changed to delete the following sentence but a Google cache of the original page can be found here.

My brother has worked on renewable energy projects at Shell, oil refineries in Oman, a start-up project in Fort McMurray and now at a refinery at Suncor in Montreal. As a chemical engineer, he knows exactly what priorities these companies have for the environment, its workers and the emphasis they put on social responsibility.

He supports the Green Party.

I have worked at several start ups on Fort McMurray. Some very good friends of mine ended up in the Sudan working for Talisman, out of Calgary.

Yes, the profits went to the oppressive leaders in the north (the plant was in southern Sudan) but, as demanded by the oil company, no government troops were allowed within 5 miles of the plant. The rebels (Jaweed are government backed) had that enforced upon them too.

There was an oasis (no pun intended) of peace about the oil facility where the company provided supplies to the refugees.

International and nation pressure forces Talisman to sell the operation (to the Chinese).

sometimes things are not what they seem.

Talisman sold off its 25% interest in Sudan's Greater Nile Petroleum Operating Co to India after reports surfaced in the US and UK that Talisman had allowed National Islamic Front government gunships to use its airstrips to perpetrate genocide against Sudanese non-Muslims in the south. 2.5 million killed, 5 million displaced.

Talisman is now talking about returning to Sudan again.

You mean Ezra Levant's book is just a stupid piece of shit???

Thank heavens that i stole my copy!

what am i saying?

I don't have any interest in reading more of his drivel than the Toronto Sun excerpted and which i read in a discarded copy.

Huge giant gas and oil company's, will always say, it is impossible to have a spill. There are too many safety features in place.

A bunch of, el torro poo poo. We don't even hear about half of the, small oil spills happening all around the globe. The lands, river, streams and lakes being poisoned, by pipe bursts, and toxic mine waste, is insane. The huge gas and oil company's are concerned by the oil spills? The hell they are, greed comes first. They should be force fed water, from a stream close to the Alberta dirty tar sands. Or eat the deformed fish, out of Lake Athabasca. Perhaps, we can kill some of those s.o.b.s off, like the people dying of cancer, close to the tar sands.