The price of doing democracy 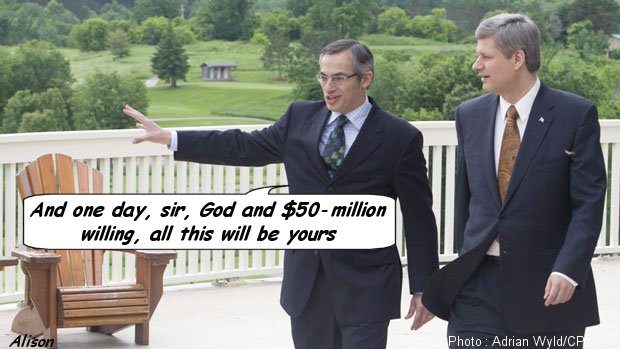 In the 2006 federal election, Tony Clement won his won his Parry Sound-Muskoka riding by a mere 28 votes.

In 2008, following election endorsements from local mayors on his G8 slush fund tailgate committee which he used to misdirect public funds intended for border infrastructure to gazebos and flower pots in his riding, he increased that vote margin to almost 11,000.

Our democracy is dying and our collective yawning about this (and the whole G20 abomination) is symptomatic of that.

You are right thwap. Even as far away as Australia, an article was printed on, how badly democracy in Canada has eroded.

Harper doesn't even see, how other country's politicians snicker at him behind his back. Wikileaks said, Harper is a petty gasbag. Arrogant, stubborn, and co-operates no-one. He has embarrassed Canadians far too many times. The worst embarrassment is, Harper sending the worst corrupt, most despised ex premier in Canadian history, a cushy job as High Commissioner to England.

England and the rest of Europe, are angry with Harper. He is trying to peddle, the dirty tar sands oil, as clean energy. This is now Campbell's duty. Europe has banned the dirty cruddy oil. If Campbell puts one foot wrong, the Brits will tear him to pieces.

We are no longer, proud to be Canadian. Canada is no different, than other corrupt country's now. Harper has dirtied and fouled, Canada's good name.

Holy crap, did I miss something. Is Mulroney representing us in London?

People should stop subscribing to mainstream papers and CTV/Global broadcasts (I'm not bothered with Sun News/Fox News North because their audience numbers are PATHETIC). Let these assholes who endorsed Harper and continue to fail exposing him and his government as crooks and liars go bankrupt or bleed significant money.

The numbers do not matter.

More people watched As The Word Turns when it was cancelled than watched Glenn Beck at his zenith.

What really matters is the fact that the bankrolled Sun/Fox strate(r)gy pushes the extreme way, way over to the right such that folks like the good Mr. Clement and even, say, Tom Flanagan, suddenly start appearing 'reasonable' and even, wait until you start hearing it in the fall season roll-out of 2013...... 'Centrist'.

I don't disagree Ross but sh*t that's depressing. Seriously, I am seeing progressive friend speaking CON points and I find it absolutely depressing.

Alison is speaking CON points?
Where?

No, not Alison. Progressive friends in my life away from the computer.