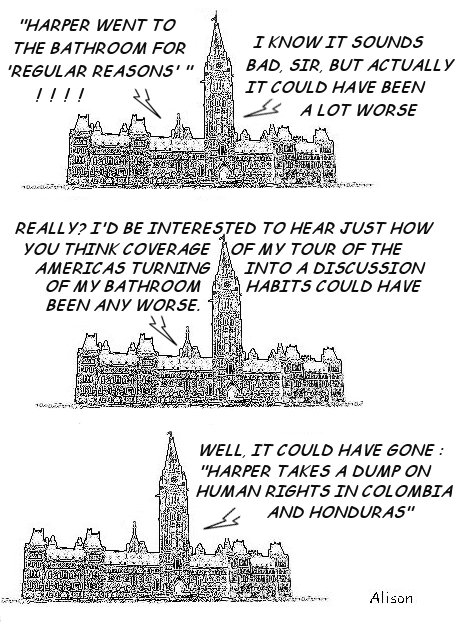 Yesterday in Colombia, Harper attacked the critics of his Canada-Colombia free trade investment agreement who object to the deaths of a couple hundred unionists and the displacement of 4.9 million people in the struggle for control over land for the development of resources that over 70 Canadian extraction companies are heavily involved in. Steve  :


"We can’t block the progress of a country like this for protectionist reasons, and (they’re) trying to use human rights as a front for doing that."

If that line sounds familiar, yes, it's the same "human rights as a phony front" argument he uses to defend Israel's atrocities in Gaza.

Tomorrow it's on to Honduras where the Harper government was the first to sanction the right wing coup in 2009 that replaced leftist president Zelaya who coincidentally had put a moratorium on further foreign mining concessions.
Honduras is getting its own Canadian free investment agreement soon as well.
.
Update : DAMMIT JANET gets confirmation on Steve's toiletbunker incident
The Regina Mom launches a potty flashmail!
Biff Loman's toon looks ahead to the next FTA
Boris notes a more recent source for Steve's 'phony human rights' shtick
Dr. Dawg and Kev have updates on the moral bankruptcy of the Canada-Colombia Free Investment Agreement
.

Harper is like a bowl obstruction in the digestive track of open and democratic societies. Worst PM ever.

On Aug. 4, the Lobo government of Honduras approved the entry of Canadian soldiers into the country to take part in a joint training exercise, as such we will be sending 150 soldiers to work alongside the military of one of the most illegitimate and oppressive regimes in the world

Oops forgot to compliment you on your fine artwork Great job as usual and thanks for the link,it's much appreciated

Harper wants to focus only on, his wars, building up his war machine, building his gulags. He is frantic, to be an energy giant. Harper wants to bask in his power and glory. And, to hell with the people.

I read, Harper gives a speech at, the Council of Foreign Relations, in New York, Sept 25/2007. This is his evil agenda.