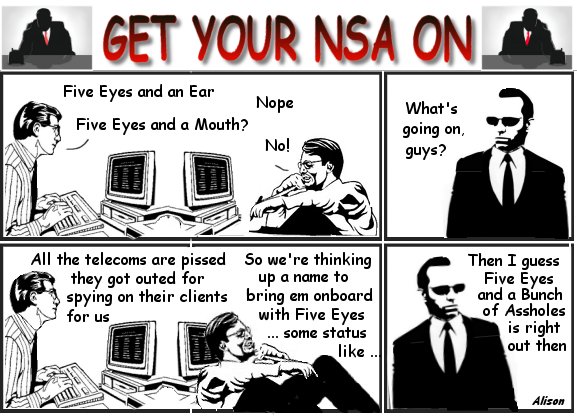 The NSA is breaking the internet
.
The Washington Post reveals that the NSA spends hundreds of millions of dollars each year paying private companies for access to large fiber optic communications backbones - part of the agency's Corporate Partner Access Project.
.
Posted by Alison at 6:15 am
Email ThisBlogThis!Share to TwitterShare to FacebookShare to Pinterest
Labels: cartoon, creeping police state, Five Eyes, GYWO, internet spying, NSA, separation of corporation and state, surveillance

After granting immunity to telecoms that participated in warrantless wiretapping, the US government now pays them to spy on us and to develop programs that make it easier for government to do so.
This is so very wrong.

A shame that the co-operating corporations are not identified, but I suppose we can make some educated guesses.

Not just telecoms of course either.
So remember - don't be evil, think different, and, um, chairs

The economic espionage angle hasn't really exploded in the news yet. It was Boris who first pointed it out to me.
In an article in WaPo on Aug 30, an NSA spokesy said : "the U.S. Department of Defense “does not engage in economic espionage in any domain, including cyber.”

But according to Bloomberg yesterday, an NSA presentation from 2012 explains the agency’s capability to penetrate private networks of companies :
"one slide in the presentation listed “economic” as an intention for spying, as well as diplomatic and political reasons."

Thanks, Anon. Great site, Techdirt. Very good at picking up on info the big papers miss in the Snowden docs.