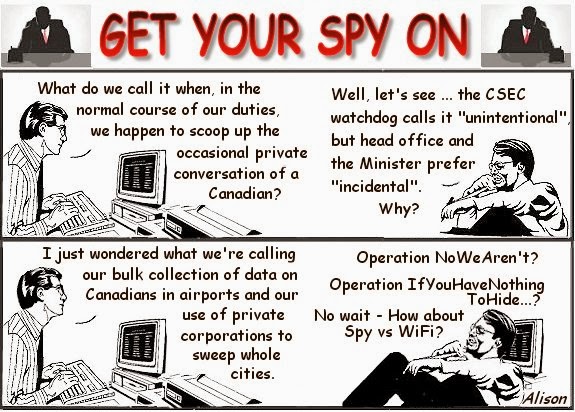 So what exactly have we learned here from this 2012 CSEC pilot project that tracked wireless devices across airports, hotels, conference centres, coffee shops, and libraries, starting from a "single Canadian airport WiFi IP address" and "two weeks worth of IP-ID data" from a "Special Canadian Source", using ">300,000 active IDs over two weeks" in a "modest size city" as a control group?

1.  As Defence Minister Rob Nicholson, CSEC, and CSEC watchdog commissioner Plouffe have all now explained to us, CSEC wasn't "tracking" these Canadians because that would be illegal and our privacy is important to them.

2. If you haven't been issued a special decoder ring providing a CSECret definition of the words "tracking" and "metadata", whose fault is that?

3. If you are a hypothetical kidnapper from a rural area coming to the big city to make your three ransom phone calls - carefully spaced exactly 40 hours apart as seen in the nice CSEC powerpoint spreadsheet - at least try to blend in with the rest of the internet by forwarding some cat pictures around as well so your lone ransom calls don't stick out like a sore thumb.
If you don't much care for forwarding cat pictures, use a friggin' payphone.
.
Sat AM update : For those of you wondering what the fuck Calandra meant in the House yesterday when he called Glenn Greenwald, co-journalist on the CBC exposé, "a porn spy" - it's the Canadian nonsense version of "espionage pornographer", used two weeks ago by American Enterprise Institute's Marc Thiessen to describe whistleblower Edward Snowden.
I guess the PMO thought Thiessen's version sounded too elitist.    h/t Techdirt
.
Sun AM update : Ryan Gallagher, one of the three journos on the original CBC piece, parses the CSEC and gov reaction.
.
The always incisive Lux Ex Umbra looks at how we should interpret CSEC's mandate now.
If, as CSEC seems to maintain, its collection of metadata is both legally within its mandate and likely to be upheld by the courts, then it would appear :


And a question of my own - Does this metadata automatically get shared with FiveEyes?
Or to put it more dramatically - is Skynet operational now?

calandra, aka PMO, might have been referring to the brief business relationship Glenn's then consulting company had with a gay pornography company in 2002. The New York Daily News reported on the deal back in June. Not much to it for the average reader, but the PMO would jump on anything to deflect criticism from their own illegal actions, wouldn't they ? ? ? ?

"espionnage pornographer" are two MASSIVE words of 4 and 3 syllables, respectively.

Bob : I do agree that's what Calandra was referring to when he launched a remarkably similar attack on Greenwald back in November, but the coincidence of using a dumbed-down version of Thiessen two weeks after he coined it would seem to confirm what RossK calls out as another example of Tea Partying within the PMO.