The Kings do "This is Spinal Tap" 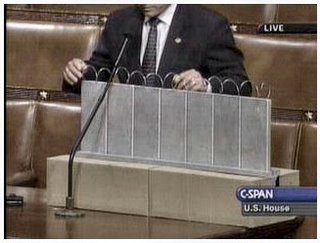 Think Progress has video up of US Rep. Steve King demonstrating a fence he designed himself for the US/Mexican border. Tell me the first thing that popped into your head when you saw this picture wasn't the Stonehenge scene from "This Is Spinal Tap" :

"I think that the problem *may* have been, that there was a Stonehenge monument on the stage that was in danger of being *crushed* by a *dwarf*. Alright? "

Another fan of fences is Rep Peter King, the Chair of the House of Representatives Homeland Security Committee. He will be up in Canada tomorrow checking out whether we need a fence too, "whether it's an actual barrier or a virtual wall with sensors and other equipment".

Says Peter King : "I think it's a disproportionate number of al-Qaida in Canada because of their very liberal immigration laws, because of how political asylum is granted so easily."

Yes, and we will be proudly granting political asylum to US war resistors too. The Canadian government won't, of course, but the rest of us will. Just like last time.

I sure hope I haven't confused you here by mentioning two fence enthusiasts named King in the same post.
Fence-building Rep. Steve King is a total whackjob who described the Abu Ghraib torture as hazing, says Iraq is safer than Washington DC, and claims Senator Joe McCarthy as a personal hero.
Whereas House Chair of Homeland Security Committee Peter King is merely a former IRA supporter who still believes there is a connection between Saddam Hussein and al-Qaeda and wants the New York Times prosecuted for treason. Sigh.

Hey, just for fun, given that Steve says his fence could go up at a rate of a mile per day, how long would it take for Peter to have one built along the Canadian border?
Let's see....4000 miles divided by 365 days....equals 11 years.

One more quote from "Spinal Tap" seems appropriate here :
"The numbers all go to eleven. Look, right across the board, eleven, eleven, eleven and... "
Posted by Alison at 2:54 pm
Email ThisBlogThis!Share to TwitterShare to FacebookShare to Pinterest

"You can't really dust for vomit."

Good post.
King says, “we do this with livestock all the time.”

Well it shouldn't cost too much only being only 12 inches high?

Clearly, All the Kings' Horses and All The Kings Men couldn't get the Cons to turn the Wingnuttery down below Eleven again.

But if they were Patti's Horses on the other hand....

i was kinda hoping for a christo curtain.
remember his valley one?
http://christojeanneclaude.net/vc.html

So, who would win a no-holds-barred wingnut-off between Steve and Peter King?

Ok, Anonymous A.L, I'll bite.
What has the 100 mile wall built by GDR to keep its citizens in got to do with a proposed US wall to keep everyone but temporary labour and raw materials out?
Not that I think the US wall is even remotely likely.

isn't it a bit like gated communities...from our persepective it's to keep 'them' in.

anyways i've gone and ordered a set of 12 to put around the garden.