$93K a day for advice on outsourcing government 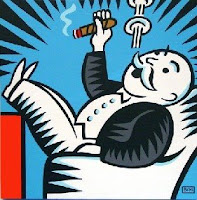 "Trained economist" Stephen Harper has given Deloitte, the world's largest accounting and consulting and outsourcing firm with $28.8 billion in profits for 2011 , a $19.8-million contract to advise federal cabinet and senior officials on how to trim $4 billion from government program spending in order to balance the books by 2014.
The contract runs till March 31, 2013, with an option for a one-year extension

New Conservative Party motto : You have to spend money to save money.

Back in December, CBC ran a story on the ballooning of a parallel civil service made up of consulting firms.


"... preliminary findings show that over the past five years, the cost of outsourcing has ballooned by at least 80 per cent. Estimates reveal the government is spending billions of dollars a year on professional services.

"I've been in environments where there are 80 consultants and 10 staff or 20 staff and we outnumber them and that's a very different experience from when you're the two or three token consultants," said Gordon Martin, a senior analyst and technical architect who is one of the thousands of people who works as a contractor for the government.

Alex Beraskow, who runs a consulting firm specializing in IT and management, said the use of consultants by the government is a huge business.

"It's the single largest market in Canada for professional services. It's what we call a sunrise industry rather than a sunset industry," said Beraskow.

Maurice Chenier, chief executive officer of the Information Technology Services Branch at Public Works, noted that about a third of the staff in his department are consultants."

Billions of dollars a year on consultants. Do you think Deloitte is likely to recommend $4B less of them?

Update : Deloitte has consulted on a number of other issues both within Canada and worldwide : water privatization, massaging the tarsands image.

Earlier this year in conjunction with Public Policy Forum they published Innovation in Government? Conversations with Canada's Public Service Leaders - about 100 of them, mostly deputy ministers.

A June 23 2011 interview on Business News Network - Innovation and Re-making the Canadian Government - introduced Deloitte Global Director William Eggers as someone who has "been coming up here four or five times a year for years" to advise government on "efficiencies".
Yes, he said, he's been up here so many times he's joked with Canadian government officials that he should be made an honorary Canadian citizen by now. Eggers :


"I used to lead something called the Texas Performance Review and our job was just to go in and find anywhere from a billion to two billion dollars each biennial of savings ... you know what we did? We looked all over the world for good ideas in business that we could connect back to government."

Hey, if it's good enough for Texas, it's good enough for Steve.
.
Posted by Alison at 5:50 pm
Email ThisBlogThis!Share to TwitterShare to FacebookShare to Pinterest
Labels: Deloitte, outsourcing government, separation of corporation and state, Stephen Harper the Economist

Once again AlisonTeeVee is on the case - Just like Kojak . . . .

hey WEB. It's your money that' being talked about.

That's why I was complimenting Alison on a job well done, Mark . . . .

The price tag is obscene. The terms of the contract should be disclosed. The only consulting contracts that ever resemble that kind of ticket price involve lots of material costs such as getting a whole government on line and upgraded (lots of hardware and software included in the price tag).

Also relevant to this:
\
http://www.policyalternatives.ca/publications/reports/shadow-public-service

Thank you, Peter, I'd forgotten that excellent Centre for Policy Alternatives report :

"Over the past five years, personnel outsourcing costs have risen 79%. While federal departments have had their budgets capped, expenditures on outside consultants have not been touched and remain above $1 billion a year,” says Macdonald.

“Outsourcing isn’t what it used to be. Contractors aren’t coming in for a week to do some filing, they are now being hired on contract for years at a time to work beside regular employees, “ Macdonald says. “This system of parallel HR is where government managers are turning after last year’s departmental caps.”

Four large departments—Public Works and Government Services Canada, National Defence and Canadian Forces, Human Resources and Skills Development, and Public Safety and Emergency Preparedness—make up half of all federal government outsourcing. Their payrolls increased by only 9% since 2005-06, but their personnel outsourcing costs exploded, rising by 100%."


BY : I bow to your superior knowledge on these things. They are very big on IT.
I think when most of us out here hear the phrase "consulting firm" we imagine studies and recommendations but if you click the links above for water privatization or tarsands massaging you'll see they do restructuring.
eg : a public utility in Australia:

"We trained over 1,500 client staff members in multiple locations over a six-week period. In addition, we provided 40 on-site consultants in a project team of over 130 team members to help address human resource issues faced during the 11-month implementation."