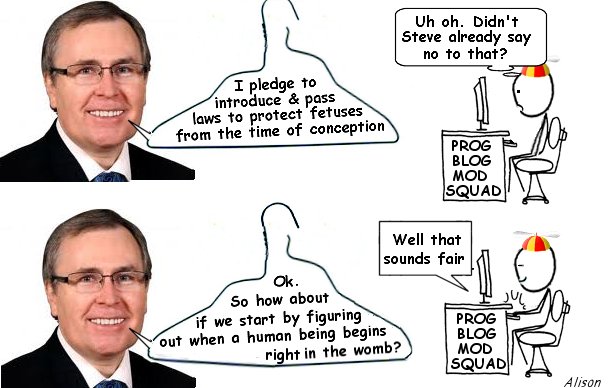 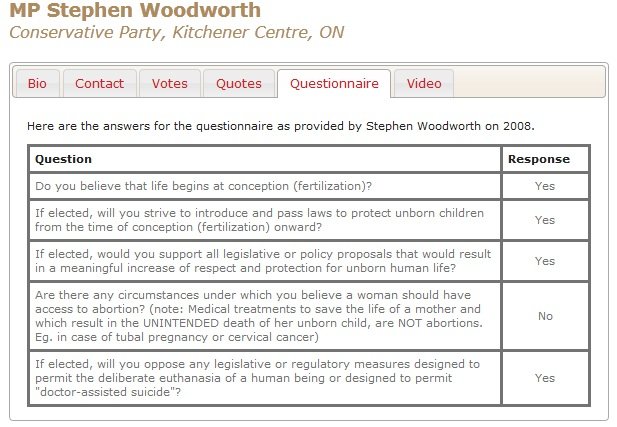 DAMMIT JANET! where it all began

Rusty Idols : Not Open for Debate

Feminist Christian Socialist : My line in the sand

Orwell's Bastard : Hey, 'Progressive Bloggers': Are you giant wankers or just trying to look like it? and
On reproductive freedom, there is nothing to fucking 'debate'.

Harebell : Why should people have to justify the right to own their own body?

A Creative Revolution : So reasonable and open minded their brains fell out

The Ryan Painter Show : So Long Prog Blog or A Fundamental Stand in Defence of Womens Rights

Sabina Becker@News of the Restless : It's shit like this ...

Queer Thoughts : Many of my Friends are gone

Sister Sage's Musings : I Really Don't Have Much More To Add
.

One more time : OPPOSE MOTION 312 because currently there are no limits on "choice".
Let's keep it that way.
.
Posted by Alison at 5:37 am
Email ThisBlogThis!Share to TwitterShare to FacebookShare to Pinterest
Labels: abortion, Blogs, Motion C312, pro-choice, Stephen Woodworth

Great photo, and I especially like the screenshot of the questionaire. Damn that's scary; no abortions for ANY reason? How extreme can you get? He sounds like Rick Santorum!

No abortion for any reason. Yeah, PB, let's have a debate about that. Wankers.

I love your cartoon. You've captured it perfectly.

That questionnaire is seriously looney tunes hard right...very scary, do the "Prog Blog Mod Squad" (great name) really know what they're supporting when they don't condemn bloggers who are open to this kind of question. Really showing their true colours I guess.

It's so telling that W Kinsella is now on their Blog-roll. He loves him some Catholicism. See the post where he thought the Priest should punch a parishioner in the face because the parishioner was wearing non-WK approved clothing. Just what Jesus would do, he thought peoples clothing was oh so important. But what to expect from a lawyer still pretending to be a "punk"?

Hard not to notice that his "punk" band just released an album with only deep cleavage on the cover..but of course he supports feminism too(cough..cough)

I liked the carton!

I don'tknow where Woodshead is coming from, well sort of like a long time ago, so 16th centurary.

There are some things our Canadian society settled a long time ago. A woman's right to control her own body is one of those things.

Ugh. Why do people consistently word questions about abortion so poorly? Not only is the first question stupid but he got the answer wrong! The two sex cells or gametes that come together to form a fertilized egg are living before they do so. As are all the other cells that make up our bodies, and the bodies of all life on earth...The question is where does personhood begin. GAH!

Second question is also stupid, unborn children is oxymoronic, two terms that are in direct contradiction with each other. Children are by definition already born, and they certainly aren't fertilized eggs. Most of which don't make it to the implantation phase and therefore don't even trigger pregnancy. So it's basically a lost cause from the start. Don't ever start the conversation before implantation or it doesn't make any sense whatsoever. >_<!!!

Jen, Eaf, and Anons : I've linked to the questionnaire before but thought I should also post it for those who don't click links. It's sent out to candidates by Campaign Life Coalition as an anti-choicers voters guide.

NML said "The question is where does personhood begin."

Yes. I'm interested in how Woodie expects to have that answered "scientifically", as he puts it, by his proposed committee.
The questions actually posed in Woodworth's Motion 312 are as follows :

Wankworth's eyes have that glazed zealot vibe to them; I suspect the only "scientifically" info acceptable to his CONfrères on his committee will be presented by the Fetus Lobby School for "Intelligent Design".

I forget what year it was that some Eskimos quit leaving the baby girls, born, to die
And for all the "folks" who want to talk about the "late" abortions, they really should go or revisit the memorial pages and testimonies of deep appreciation for Dr. Tiller.

I have also left prog blogs. I have been considering doing so for a year or more.

The last straw was the acceptance of opening a debate on women's rights.

You can add me to the list of fleeing progressives, too:

I was wondering what that stench was, and where it was coming from. Wasn't dead mouse, it was dead WOMEN. This is up for debate? Feh.