Harper's Parade of Perps with Perks #6

Bunch up everyone to make room for Steve's latest Perp with Perks, Saulie Zajdel.

Arrested today and facing five counts of corruption, breach of trust, and fraud from 2006 to 2011 in the anti-corruption sweep that also bagged the mayor of Montreal, Zajdel is better known to us as the guy who was put on the public payroll as a "cultural liaison" by Heritage Min James Moore for an alleged $60G's to act as the Cons' shadow pretend MP in Irving Cotler's riding after he lost to him in the 2011 election. 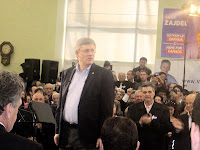 Here's Nick Kouvalis from Campaign Research defending their        "reprehensible" calls made into the riding on Steve and Zajdel's behalf implying Cotler would not run.

After his election loss to Cotler, Zajdel gave speeches in the Mount Royal riding, such as one advertised as : “How the Federal Government Relates to Israel.”

A 2011 election campaign vid uploaded by Zajdel, along with the tagline :


"Let us thank our prime minister Stephen Harper for how he supports the land of Israel, he is its strongest advocate of any leader in the world." 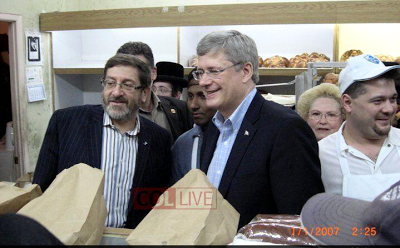 Steve and Saulie in happier times in a photo op featuring brown paper bags - a prop usually avoided by the Cons after Brian Mulroney.
Mulroney spoke at a $600-a-plate fundraiser for Dean Del Mastro, another Perp with Perks, this past May. [h/t Toe at Bread 'n Roses]

Brown bag photo h/t : Robert Jensen2 via Holly Stick in comments.
And to Canadian Cynic for the nudge.

Your cretinous & criminal catch .. It reminds me of jigging for fish.. usually cod, but in this case con.. in more ways than at first obvious. Drop your line and hook and start jerking (jigging) it up and down. No need for bait, you just snag them, catch em by the tail, a fin, a double chin ..

I suggest you add James Moore to your list.. just because. Because he's so glib, so slick n slippery and thinks its funny how he wastes Canadians' time and trust and dollars with his showboating in Question Period. Dignity ? Leadership ? Respect ? He's proving what a toxic & ignorant egotistical bum he is..

Obviously like Stephen Harper and many of the Ministers.. Moore has a capable intellect. Why none of them choose to utilize it to serve Canadians or their constituents as elected public servants is a question they must answer.. and not in the playpen, romper room of The House of Commons where jibbering idiocy seems de rigeur and in fashion.

What a disgusting collection you've pulled together, I hope you have your rabies shots, tetanus, malaria .. etc .. These political animals are disgusting 'carriers' .. political vermin

I second the salamander's james moore description: slick and slippery . . . .

Let's not forget that Saulie's relationship to Campaign Research and Nick Kouvalis. The firm was sanctioned by the marketing association for the dirty calls made in Irwin Cotler's riding prior to the election. Not sure who came first, Campaign Research to figure out what interested voters in that riding most in order to select a suitable candidate or the candidate that needed help in beating a long-standing MP.

Bob : Moore, the heir presumptive to the Con throne.

Salamander : I admit it's a bit arbitrary - like where's Airshow and Tony Gazebo? - but I started with 8 in March and have only added Con perps who have been arrested or shunned by their Con peers since.
Can't believe I've added 13 in just the last 3 months!

DJ BALL AKA THE HEATSEEKER said...

Nice job Allison
I put your photoshop up on my epic list.
http://djball604.tumblr.com/post/50967685678/harpergovernmentgreatesthits

Moore, the heir presumptive to the Con throne.

And I thought it would be that stellar defender of GLBT rights: jason kenney!

DJ BALL : Well thank you kindly. Saw my Tony Gazebo toon up over there as well.

I’m in love with your blog and your writing. I just wrote something on hip- hop and feminism and would love to hear what you think!

Have an amazing day!

Whoever and whatever, there is a very good chance that the next leader of the Reformatories will be middle aged white male of questionable sexuality and maybe even a forty something virgin!

I was bummed out and embarrassed about being a virgin (still) when I was fourteen.

Bambi : I'm hopeless on hip-hop, Beyonce, etc. If you feel you can lay claim to "bitches", as the dudes would have it, in an empowering way, good for you - I just can't get there myself.

The RCMP's criminal case against Duffy:

Holly : Harper’s former special adviser and legal counsel Benjamin Perrin issues parsy statement in May : "I was not consulted on, and did not participate in, Nigel Wright’s decision to write a personal cheque to reimburse Senator Duffy’s expenses."
Now Wright’s lawyer says Perrin was aware of the arrangement but Steve wasn't.
Plausible deniability for top dog only.