Steve and Barry have a little chat 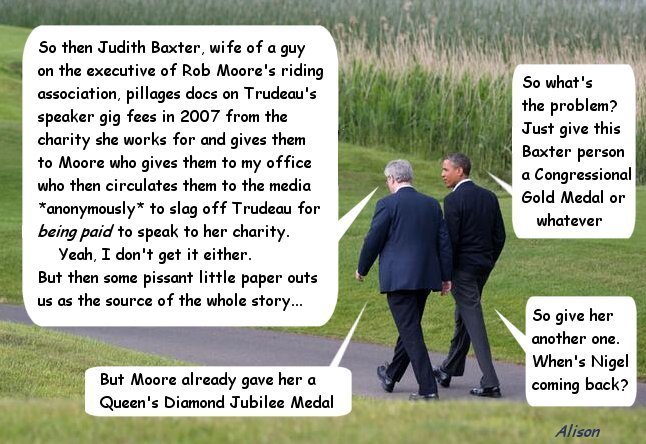 Really excellent background from The Tyee on the outing of the numpty non-issue of charity speaker gig fees that the Cons used to waste the last week of the House of Commons before summer recess.
Tyee Bonus : Spot the Lickspittle

And as Dammit Janet asks : Why did no other media outlet but that one tiny paper, the Barrie Advance, realize that the real story here was the PMO sending out partisan trumped-up *anonymous* leaks on the taxpayers' dime?
.
Posted by Alison at 3:29 pm
Email ThisBlogThis!Share to TwitterShare to FacebookShare to Pinterest
Labels: Con fuckwittery, ConToons, media

Well it turns out his newspaper's owner supports the Harper Government™

Love the way Ms. Rupp of The Tyee uses the same descriptive, legally correct terminology for stevie's cabal as you, Alison . . . .

Where is the Congressional Gold Medal or Silver Star for Edward Snowden and Bradley Manning?