Patrick Brown, come on down!

When PMO communications officer Erica Meekes sent The Barrie Advance details and materials on a 2007 money-losing charity speaking gig Justin Trudeau did at Georgian College before he was an MP, she asked Advance editor Lori Martin to attribute her slag to an anonymous "source" rather than to the PMO.
Meekes further advised contacting Patrick Brown, “the local MP for Georgian College,” for comment, and Brown subsequently provided some suitably partisan disparaging comments about Trudeau. 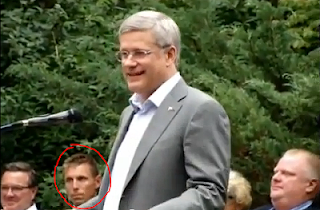 Trying to remember where you've heard Patrick Brown's name before?

Here he is between Flaherty and Harper at the now infamous 2011 Ford family BBQ, listening to Harper thank Rob Ford for his help in getting elected and calling for a Harper/Hudak/Ford hat trick government.

Later on in the full video, FinMin Jim Flaherty thanked Patrick Brown and fellow MP Kellie Leitch, hidden behind Harper here, for "being key to organizing this event".

The PMO was the driver behind this story about Trudeau but now that it's turned into an embarrassment for them, John Ivison does not seem to have got the new memo to stop talking it.
http://fullcomment.nationalpost.com/2013/06/22/justin-trudeau-was-using-his-position-when-he-gave-20k-speech/

It takes a whole village of idiots to make complete asses of themselves.

These "conservatives" are the sort of scum who would try three times to mock a guy who lost his legs saving orphans from a fire. After their third failure met with still more public disgust, they'd get together, scratch their stupid heads and say: "I don't get it! This guy must be made of teflon or something!"

Thwap : Then they'd agree the real fault lay with the liberal media.