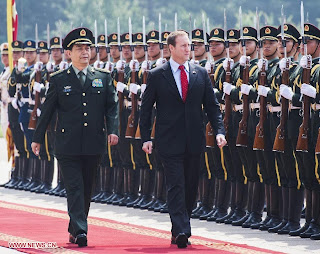 If you aren't in the habit of reading the China People's Daily, you probably missed the news that Canada signed a military co-operation agreement with China this summer - because certainly our own media haven't seen fit to mention it.

When DefMin Airshow MacKay met his counterpart General Chang Wanquan in Beijing in June, CBC only reported on how MacKay "laid down clear markers" on "cyberattacks originating in China", comparing hacking to terrorism.

The People's Daily had a slightly different take on the same meeting :
China, Canada sign initiative on military co-operation.


"China and Canada signed an initiative on military cooperation as defense ministers of the two countries held talks in Beijing on Monday. The two sides held that China and Canada are important countries to the Asia-Pacific region and bear common responsibilities in safeguarding peace, stability and prosperity in the region."

Meanwhile, the Canada-China FIPA investment agreement, which had been tabled last September, was still quietly moldering away in some mysterious Con legal netherworld while Steve approved the $15.1-billion takeover of Nexen by the Chinese state-owned oil company CNOOC. 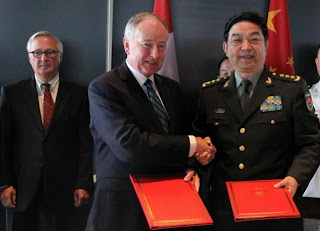 Five days ago, China DefMin General Chang was in Ottawa signing the "People's Liberation Army military cooperation program and Canadian Initiative" according to Xinhua, and shaking hands with Canada's new DefMin Rob Nicholson, who swapped portfolios with MacKay in July.


"Chang said military relations between China and Canada have maintained a sound momentum of development, as evidenced by frequent contacts between military leaders of the two sides, and their smooth and close coordination on global and regional issues.
Meanwhile, continuous progress has been made in bilateral military cooperation, such as in military training, international peace-keeping, defense education and mutual visits by warships, he said."

Three days previously, Chang signed a similar sounding deal with U.S. Secretary of Defense Chuck Hagel in Washington ... peace, stability, security, prosperity, yadda yadda yadda.
Chang said China had been invited to participate in next year's RIMPAC in Hawaii, "the world's largest international maritime warfare exercise", along with 22 other countries including the US, Canada, Russia, Australia, and Japan.

The day after Nicholson and Chang signed their symbolic war games agreement in Ottawa, MultiCultMin Jason Kenney and CitImmMin Chris Alexander announced $1.5-million in federal funds to build a memorial in Ottawa to the tens of millions of innocent victims of Communist regimes around the world :

Once completed, this memorial will teach future generations how millions lost their lives and suffered in inhumane conditions at the hands of Communist regimes,” said Minister Kenney. “It will also serve as a reminder to all Canadians that glorifying Communist symbols insults the memory of these victims, and that we must never take for granted our core values of freedom, democracy, human rights and the rule of law.

Ooodles of press gravy for the red meat base on this one.
I'm guessing the monument got a nice press kit and the military co-operation agreement did not.

Your second moment of irony - see the man to the left of Nicholson and Chang in the People's Daily photo op above ? That's former CSIS director Richard Fadden, who shocked people three years ago with his remarks about public officials and cabinet ministers in BC/Alberta being under the influence of China, however unwittingly.
This April, CBC reported that Fadden had been shuffled to Defence.

Here's part of that 2010 interview with Mansbridge :

Update : Laila Yuile was on this days ago! and included a fascinating speech from Ambassador Zhang Junsai at a luncheon in Calgary in May :


“Many people have even started to talk about North America’s potential of becoming the new Middle East.”

Earlier in its tenure, the Harper government took a hard line on China’s human-rights record, Huebert said, and the Conservatives may be reluctant to be seen “cozying up” to Beijing for domestic political reasons, and at a time of heightened international tension.

This government does have a history of secrecy regarding contentious trade and military agreements. There was the SPP with the US and the "homeland security" accord with Israel.

Kudos to you and Laila for scratching around and discovering all of this, M'Lady - Good stuff!

Superb work, Alison. And they hustle Chinese reporters out of news conferences.

Does this put Canada, as well as their masters in China in the US crosshairs, you know with the current US Military "pivot" to the Asia/Pacific front?

We may not be Asian (tho some live here), but we are on the Pacific and for all practical purposes now part of China!

Thanks for the mention Alison and great stuff! When I saw the Chinese paper last week I gagged. And of course the only place this was reported locally was in the Desi version of the Van Sun.... nothing in either of the main papers.

And they hustle Chinese reporters out of news conferences.

Owen : That's what started me off on this - wondering what that Chinese reporter's question was going to be about and if that's why he got yanked out of the line.

So did you find out?

Hi Laila - great work from you!

Anon : Not conclusively or believe me I would have titled the post - The real reason the Chinese reporter got turfed!

Does this mean, Harper no longer needs a military in the High Arctic?

What about the Enbridge pipeline?

Will the Communist China Army, also guard their Enbridge pipeline? Harper knows the BC people and many others are, dead set against the pipeline.

Reporter Li Xuejiang in his own words, as translated from Huanqiu, the Chinese version of the Global Times: