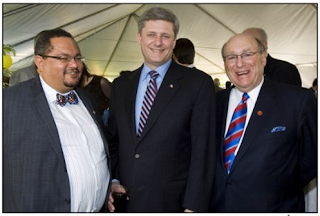 Gwyn Morgan, chairman of SNC-Lavalin for six years til this past May, portrayed the beleaguered company in his recent July G&M article as "the victim of embezzlement by two trusted, long-time executives."
There are several long-time execs to choose from here so I'm not sure exactly which two he is referring to.  Morgan, you will recall, was Harper's pick to head up his 2006 ethics and accountability commission.

Helping SNC-L out during this period of victimhood is the Harper Government, who just extended them a defence contract worth $400 million over up to ten years to provide Canadian troops overseas with military logistical support. An SNC-L exec VP said they were proud to support the Canadian Forces.
The World Bank might have banned SNC-L and its affiliates from bidding on their aid projects for 10 years due to allegations of engaging in corrupt or fraudulent practices across four continents - and CIDA has followed suit - but the Public Works Dept. has its own criteria.

Likewise the crown corporation, Canadian Commercial Corporation, best known for its primary job of  selling $1.4-billion of Canadian military technology to the US Department of Defense, will soon decide whether to award SNC-L the contract to build a children's hospital in Trinidad Tobago. SNC-L has already finished designing it as part of a joint Canada/Trinidad Tobago venture and like the SNC-L MUHC hospital deal in Canada, it's a public-private partnership.
People in T&T are understandably concerned about dealing with a company caught up in the largest corporate corruption case in Canadian history, with fraud and bribery charges pending in Libya, Algeria, Cambodia, Bangladesh, and Montreal, but as T&T High Commissioner to Canada and former SNC-L exec Philip Buxo explained :


"The T&T Government is not involved in the decision-making process to hire any Canadian company to construct the hospital. The full responsibility for the selection of any company is the exclusive responsibility of the Canadian government’s designated co-ordinator, the CCC.”

Senator Angus was a director-at-large of the MUHC board that approved the recommendation of the search committee and hired Dr. Arthur Porter as CEO in Jan 2004. Angus became MUHC chair in 2007.

In Sept 2008 Harper appointed both Porter and Couillard to SIRC.

The MUHC board ratified the choice of SNC-L to build the $1.3 billion mega-hospital in a public-private partnership in April 2010. Three weeks later, SNC-L payments of $22.5-million in consulting fees to Porter's Sierra Asset Management began rolling in, continuing six months after Porter left MUHC.

Senator Angus continued to stand by Porter publicly, no matter how damning the news about him. In Nov 2011 Arthur Porter stepped down as MUHC director general, followed by Senator Angus' exit as chair of MUHC a month later.

Fun fact : When SNC-L decided to conduct an internal audit into all this in 2012, it hired Senator Angus' law firm Stikeman Elliott LLP, from which he retired in 2009 as a senior partner after four and a half decades.
.
Update : Excellent piece on the SNC-L/T&T deal from economists Patricia Adams and Brady Yauch :


"The injudicious decision by one Canadian federal government agency to arrange an untendered, closed-door deal for SNC-Lavalin while another, the federal police force, investigates the company for wrongdoing seems lost on government officials. Canadian taxpayers would be right to charge, as are Trinidadian and Tobagonians in their own country, that our government is failing to maintain proper standards in the handling of public projects.

More fundamentally, untendered, closed-door deals arranged by the Canadian government for any company can’t help but create the very environment in which bribery, corruption, and conspiracy to defraud taxpayers and ratepayers thrives.

in the end, birds of a feather flock together. This is just what elites do - they protect their own and what they believe they should own and more.

and great post and research in following and connecting the dots.

Stupid ether world ate my comment. Anyway, this shoddy deal makes the World Bank look like angels in comparison. Why on earth is Canada brokering this deal through the CCC? And why does T&T have no decision-making powers in selecting the PPP contractor?

Hi and thanks for your encouragement. I've updated a great quote and link at the end of the post.

BY : Why on earth is Canada brokering this deal through the CCC?
It's what they're set up to do. CCC and Export Development Canada act as the marketing arm of the gov, using a combination of tax dollars and fees charged to back Canadian exporting firms in mostly developing markets. And, as they say in their mandate, "to serve as a foreign policy instrument for the government of Canada".

And why does T&T have no decision-making powers in selecting the PPP contractor?
I'm guessing SNC-L is the only company interested in building the hospital T&T needs and CCC is the only possible partner interested in backing them. CCC does not divulge details of how it spends our tax dollars -- which stinks, frankly, given their foreign policy role.

This was the prime minister who crowed about a new ethical standard in Ottawa.

Our BC LIEberals of course also prefer to deal with corrupt corps like SNC-Lavalin and Accenture - bastard offspring of Andersen Accounting of Enron fame!

Campbell/Clark Crime Group motto:
If you ain't at least as sleazy as us, we don't want to deal with you!

As a former SNC-Lavalin employee. NOTHING surprises me about that company. 2 year of my life I'll never get back. Sloth, stupidity and blind faith seem to drive the employees ever forward. The company is filled with ex govt. employees.
The govt mindset is all pervasive. Paperwork, paperwork, paperwork.