Oh that's so unfair of me -it's a couple of years old. Ok, here they are again after another fishing trip last year. 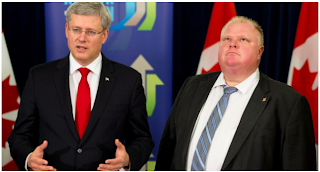 But it was this pic of Steve showing up to do a Toronto subway funding presser with Ford last month that had me convinced the Ford crack video was gone forever. Well, that and the fact people in and around that vid were getting shot and arrested or beaten up with pipes.

Why would Steve risk being associated with him?


The Star Today : Police have the video that appears to show mayor smoking crack, Blair says


“I have no reason to resign,” Ford says. Ford friend Alexander Sandro Lisi charged with extortion related to the video, police chief says

"It's safe to say the mayor does appear in the video,” Blair told reporters.

Blair said he has seen the video. His reaction? “As a citizen of the city, I am disappointed.”

In the 44 days, Lisi and Ford had 349 “points of telephone contact,” the documents said.

Ford helped Lisi escape police surveillance at least once, letting his friend sneak into City Hall’s underground employee parking lot, according to allegations in the police’s ITO.  On Wednesday, July 24, a detective sergeant with the force’s mobile support unit followed Lisi as he weaved his way through side streets near the Westway.  Lisi “was followed to the downtown core where he began to circle the area of Bay Street and Queen Street West, executing U-turns on several occasions,” the police said.  Lisi eventually dipped into the underground lot at City Hall.   Ford, waiting at the entrance, “swiped him into the controlled access area,” the police said.

Earlier versions of the story said police obtained the vid from deleted files on a hard drive obtained in their Dixon Road sweep back in June. Recent versions now say Oct. 29.


Sun News, whose coverage of the Ford crack vid has run mostly to complaining that the Star has it in for Ford and how any idiot could have faked the vid, was still running with that slant up til an hour ago when they suddenly broke off mid rant about the media and went with :

The Star broke the original story and the Sun excoriated them for it week after week. Now the Sun are trying to horn in on their revenue from it.
Wankers.

"Blair said he has seen the video. His reaction? 'As a citizen of the city, I am disappointed.'"

There's no proof it's crack. Chief Blair said the footage is not enough to press charges.

He also doesn't have to resign and can't be removed from office even if convicted of something. Only a prison sentence could oust him.

I was thinking about this a few hours ago. Such a bizarre state of affairs. I wonder what city council would try to do if such a thing transpired.

New CPC slogan: Stephen Harper - at least he isn't Rob Ford.
Harper must be happy with this serendipitous timing. Good for you for driving home their connection

Anon : A CBC poll - ok, so it's only a poll - is showing people think PMO/Senate scandal more important than Ford scandal 90% to 7% so far.
Thank goodness.

Boris : You mean jail or conviction? Conviction - they could make his job very difficult but they can't vote him out.

stevie: "Rob's cleaning up the NDP mess in Toronto.

just another example of Harper's "good judgement". They both look good wearing it all.

"Why would Steve risk being associated with him"

Birds of a feather flock together works for me!

It was refreshing to learn that Brazeau was smart enough to finally realize Shifty Steve doesn't like Patrick's people. If he could get help dealing with his demons (apparently substance abuse and inexcusable treatment of women) he would be the shiniest knight of the three Puffkateers.

Who knows now that he has learned what most of his people have known for centuries, that White Man Speak with Forked Tongue, he just might become a better person and do something to improve the lot of First Nations.

If Rod Ford were black he would be in jail already awaiting trial. There is a certain sympathy toward whites in North America. What whites get away with blacks simply can't. The man has been caught on video, admitted to buying illegal drugs while in office, swore on live tv and he is still mayor? Let a black man try the same stunts and see what happens. Black men are jailed just for possessing a spliff while a white man can buy drugs smoke it while being taped, swear on live tv and still be mayor. If the rcmp is throwing black men in jail for possessing a spliff then Rob Ford should also do jail time. Fair is fair.

Koot : Brazman yesterday : "Anyone interested in knowing about the #cpc/caucus mtgs/PMO control, I'm officially for hire."

Anon@10:27 : He's still mayor because voters elected him to office and he can't legally be removed from that office unless he is charged with something that results in jail time. It would be the same rules if he were black.

Other than that, I agree with you.
Two years ago the prison ombudsman noted a 50% spike in jail time for blacks in the last decade - 3% of the general population but 20% of total number of inmates.

The Ontario Police held off on further investigation of Ford after May 16 because they say it would have jeopardized their Project Traveler initiative, which a month later saw 43 non-whites busted.