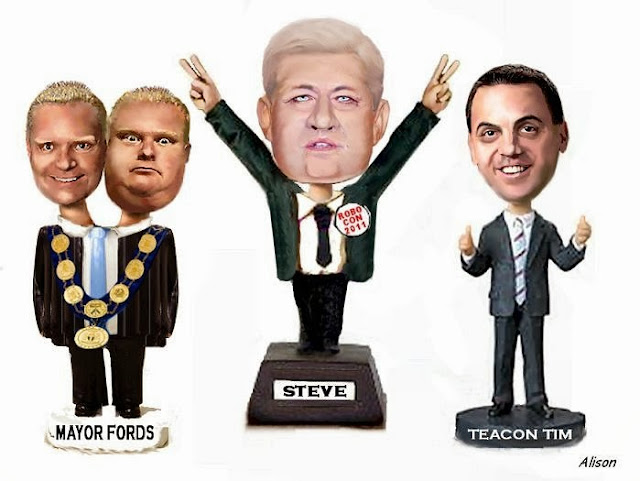 The Toronto mayor's office is selling a Rob Ford bobblehead as a fundraiser for United Way. The Robbie Bobbie looks a whole lot more like Doug Ford actually and certainly the old Steve bobblehead could do with an update too so here's the whole teacon trifecta.

Monday am update : While the budget meeting goes on upstairs at city hall, Rob and Doug and 7 city staffers are down in the lobby working the bobblehead sales line which goes round in a circle like caterpillars on the rim of a saucer.
Doug Ford : “I don’t think there’s a politician in the country, including the prime minister, that could have bobblehead dolls and have them line up around the corner.”
.
Wed update : Judge releases some more details from police Ford/Lisi ITO :

Your graphic is only missing a weeping garden gnome.

"Even after the recent events at City Hall, with the mayor admitting that he smoked crack, Hudak is not ruling out having Doug Ford run for the Tories in the next election, which could come as early as the spring."

Ford's mix of booze and OxyCONtin use makes its first appearance in the story.

Anon : Pretty sure Ford's defence is going to be that the Oxycontin, sex workers, drunk driving, and trying to punch out staffers is only due to his having been in a coke-addled stupour that one time.

Currently watching Doug Ford from Team Hudak screaming at council about haven't any of them ever done anything wrong.

Doug Ford on CNN : "Rob and I want move on and continue running the city..."

Re your update, also from Doolittle: Smith's phone stolen at the time of his murder.