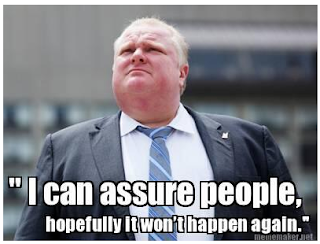 With his unofficial driver Sandro Lisi busted for trafficking and extortion, Rob Ford advised his talk radio bunker listeners on the weekend that he would get himself an official chauffeur.

That's great and all but according to the Toronto Police Oct 2 ITO, when the two of them were not popping in and out of gas station restrooms from their separate vehicles, it was sometimes Rob Ford who was driving Lisi around so I'm guessing the actual driving is not the main problem here.

Montreal Simon and Haroon Siddiqui point out the similarities between Harper and Ford today, to which I would add two more :
Photo with Ford quote from G&M media reporter Steve Ladurantaye via CC
.
Ford timeline graphic with map and bios from NaPo
.
Posted by Alison at 8:31 pm
Email ThisBlogThis!Share to TwitterShare to FacebookShare to Pinterest
Labels: Rob Ford, Stephen Harper

Now if the Ford brothers are able to force the Chief of the Toronto Police out as they are trying to do we can say with perfect impunity that Toronto is a city run by a criminal gang.

If I were CEO of a large corporate entity with a HO in Toronto I would begin emergency meetings to relocate in case Blair actually is forced out and the investigation dropped. Being known for having a HO in a third world criminal city will be very bad for business in the long run.

"Both of them have overcome their privileged backgrounds to fashion themselves as populist outsiders fighting the elites on behalf of the Con base and FordNation,"

So what happened in between Doug Ford wanting Toronto Chief Blair to step down for doing his job this morning and Rob Ford confessing to smoking crack later in the day?

Anon : Good question. Safe to assume there's a great deal we still don't know about what is essentially a homicide investigation involving a missing woman, one guy shot dead and another injured, a guy getting his legs broken in jail, a guy getting thrown off a 6th floor balcony, two people beaten with pipes, a hacker allegedly hired by a Doug Ford staffer even though Rob says Doug knew nothing about all this, and of course a second tape.
You have to wonder what was so damaging that copping to smoking crack was the better alternative.

Dana : Toronto - 4th largest city in North America - gets an apology from Rob Ford that is essentially a re-election bid. Interesting that Doug's moves to discredit Blair include pointing a finger at a member of the only outfit able to fire Blair - the police board.

So the poll of the day is -

Given that there are 3 suspended senators, which of the three will give up their seat for Mr Rob Ford's appointment to the senate. This will further assist in the PMOs aim to destroy another institution thereby moving Canada closer to a corporate controlled anarchy.

Ford has fooled us all again, he really is a superhero.