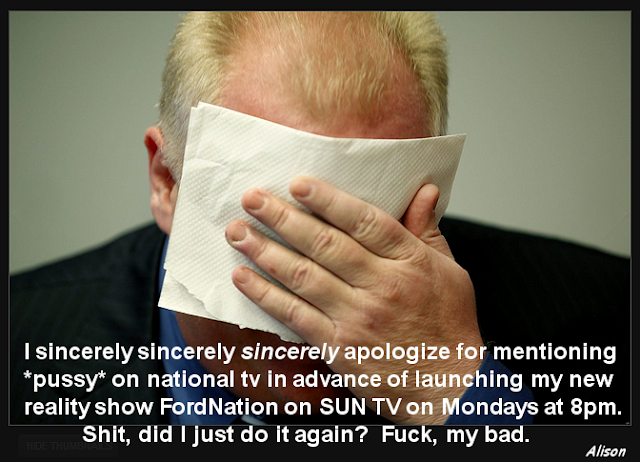 Tell me this isn't what immediately went through your mind when you heard the *pussy* apology and the SunNews FordNation "reality show" announcement on the same day.
.
Posted by Alison at 2:29 pm
Email ThisBlogThis!Share to TwitterShare to FacebookShare to Pinterest
Labels: Ford Nation, Fox News North, Rob Ford, Sun News

Nope, but this did: http://en.wikipedia.org/wiki/Blond_Ambition_World_Tour

Is this man a posterboy for "meltdown" and "heart attack" all rolled into one?

'tis a mad world when the Mayor of Canada's largest city requires a full-time bleep button.

But really it's just the raw exposition of the true heart of the CPOC; something which should have been bleeped by any self-respecting journalist from day 1.

Here's the truth of what we have to face.

Get a tight grip on yourself now.

Just about half of Metro Toronto thinks that he should either just continue on right now or sit back and get some help and after a few weeks continue on then.

That's probably reflective of the rest of the country as well.

What so many people have a hard time accepting is that Canadians are *by and large* a passive, unthoughtful, submissive people who accede to whatever point of view the government of the day wishes to promulgate.

Most people I know hate this notion but upon reflection and historical review realize that it's correct.

Dana : You know why people support Ford? Because even when he's lying, he comes across as genuine, authentic, unfiltered, and true to his own personality. Doesn't matter to many people how appalling and inappropriate to his position his actions are because the very appearance of authenticity trumps everything else.
Chavez had it; Ford has it.
Scary.
Insert paper on populism and fascism here.

No, I'm saying something more banal. Populism has broad appeal right across the political spectrum and there's good reason for that - the stultifying out-of-touch bankrupt nature of public polispeak. Ford fans look at him and think - he understands/is like ME and he's being victimized by those same elites.

Bonus : Doug Ford was on CNN today describing his brother as a "social liberal", by which I gather he means that Ford will personally come to your house and check out your broken fridge.
That's where we are here.

No, no, he's not Chavez, he's not event "the white Obama" anymore, he's the Canadian Princess Diana, hounded by the evul paparazzi:

Actually these wild parallels the Fords keep making may be part of their populist appeal.

Thanks for reminding me of the Icke(y) one, another gift that keeps on giving. Unless of course he is dead physically now as well as mentally!

But it is nice to see twitter & media concentrating more on the Senate scandal and robocalls today. I think I will just rely on Jon Stewart for the latest Ford news.