Pipelines booster British Columbians for International Prosperity or BC4P, whose website DeSmogBlog noted 4 days ago "bears remarkable similarity to the Koch-funded Americans for Prosperity", is "an independent group of concerned citizens looking to promote practical resource development" yadda yadda. They dropped the "International" from their brand name back in February :

They are not for "International Prosperity" any longer apparently. This is possibly due to their new campaign moneytrail.ca, which in turn bears a remarkable similarity to
Ethical Oil's "Foreign Special Interests and Their Deep Pocket Puppets" campaign
(and it would of course be entirely churlish of me to bring Koch up again by mentioning Ethical Oil founder Ezra Levant's internship with Koch here).
BC4P : FOLLOW THE MONEY TRAIL AND EXPLORE THE US FOUNDATION FUNDING HYPOCRISY THAT'S IMPACTING CANADIAN SOVEREIGNTY

"Wealthy American Foundations pump millions of dollars into campaigns to halt Canadian oil sands production and pipelines. The war on pipelines in BC is not about spirit bears and it's not about rain forests or climate change."

Not about spirit bears and rain forests. Got it.

Now when BC4IP/BC4P shot one of their pro-pipeline videos near my house last year, I assumed their "independent concerned citizens" consisted entirely of former ConocoPhillips and BP exec Bruce Lounds, Management Consulting in Heavy Oil / Tar Sands Sector, of North Vancouver and his website hosted in Chicago, Illinois: 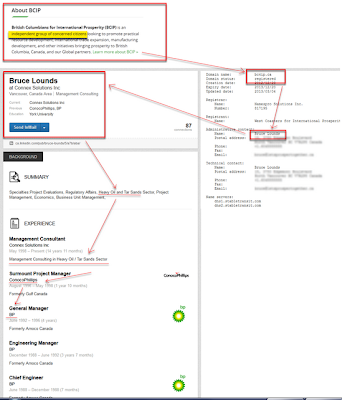 But according to this Feb 25 article in 24 Hours by frequent CBC/CTV/SunNews panellist and commentator Alise Mills (excerpted):
US has motive to block Canadian oil :

"The war on pipelines in BC is not about spirit bears and rain forests.


It is about America's economy.

American foundations have spent millions to halt Canadian pipelines and oil production.We need to build pipelines so that we become sovereign architects of our own future. "

Mills was on CBC's Power and Politics again this evening.

Honestly, CBC, I really think it's about time you mention she works for tarsands astroturfer BC4P at some point.

4 smackdowns so far and yours makes 5.

And Ms. Mills' is also on the local MoCo with Stephen Quinn regularly. I have yet to hear her association with said organization mentioned.

And, again.....For this very reason we must demand to know...

How much did multinational Enbridge spend, exactly, in Kitimat?

I had a robocall left on my answering service last week from a firm called GMI doing market research for BC4P.

It has already started here in BC Alison big oil involving itself in our elections. I almost fell off my chair when I opened your blog: I just got a call today from a company "GMI" purporting to do a survey for guess who? "British Columbians for Prosperity." The questions all had to do with Northern Gateway Pipeline and which side you were on and why. OK but the most disturbing part was the last question, which was "If a federal election was held today who would you vote for? Harper and the CPC, Mulcair and the NDP, Trudeau and the LPC, May and the GPC, other such as an independent or haven't decided yet"

Who the heck are "British Columbians for Prosperity." I thought so I googled them and they are also called British Columbians for International Prosperity - BC4IP hmmm.... sounds way to close to the Koch brothers AFP - Americans for Prosperity. This was prior to viewing Creekside. Seeing how this federal government is a front for tar sands development and what I can find out about BC4IP:

I am guessing that the push to find out who votes and for who and who does not vote or care is being started in earnest. The big oil money has vested interests in the conservative party remaining in power and if you're not likely to vote conservative you are an enemy of the oil state:

Pipelines fracking its all the same as Harper has stated you are an economic terrorist if you oppose economic development in Canada. Economic development in Harper's Canada means giving oil companies free reign to develop Canada's petroleum resources anyway they see fit. That is why Chuck Strahl is Harpers appointment to head up the CSIS' civilian oversight panel, like the articles above state big oil is taking over the security apparatus of nations it does business in:

" Now it has emerged that former cabinet minister Chuck Strahl - the man appointed by Canadian prime minister Stephen Harper to head up the CSIS' civilian oversight panel, the Security Intelligence Review Committee (SIRC) - has been lobbying for Enbridge since 2011.

But that's not all. According to CBC News, only one member of Strahl's spy watchdog committee "has no ties to either the current government or the oil industry." For instance, SIRC member Denis Losier sits on the board of directors of Enbridge-subsidiary, Enbridge NB, while Yves Fortier, is a former board member of TransCanada, the company behind the proposed Keystone XL pipeline." from the Guardian article above.

Harpers government has identified itself as repeatedly as representing the interests of big oil mostly in the Alberta tar sands 'dilbit'. Keystone XL will bring dilbit to Texas and Louisiana Northern Gateway will bring dilbit to Kitimat for shipment to China and Asia. The people who own the largest portion of and stand to gain the most from the development of Alberta's infamous tar sands - " ..71% [of the ownership of oilsands production was] foreign..."

And now these foreign companies take upon themselves to criminalize citizens who oppose the Harper government on the basis of opposing oil and gas development for foreigners and by foreigner's, whose country is this anyways?

They are preparing lists, beware, has anyone else been canvassed recently?

Also I am convinced that the Koch brothers are somehow funneling money to both BC4IP, Ezracal Oil (Ez's Ethical Oil), as well as the federal conservatives. I just recently researched a ton of stuff on the internet about the Koch boys and their 'operational fingerprints' are all over this whole conservative tar sands development mess which includes fronts like Ez and BC4IP. We know they are a major contributor to the Fraser Institute and an American Professor at the University of Calgary Tom Flanagan a major force of that institute and was behind the building of the CPC, Harper and Ez Levant, who is also a former pupil of Flanagan's.

Koch's are also the largest exporter and developer of Canadian crude:

"These sources reveal that Koch Industries has touched virtually every aspect of the tar sands industry since the company established a toehold in Canada more than 50 years ago. It has been involved in mining bitumen, the hydrocarbon resin found in the oil sands; in pipeline systems to collect and transport Canadian crude; in exporting the heavy oils to the U.S.; in refining the sulfurous, low-grade feedstock; and in the subsequent distribution and sale of a variety of finished products, from jet fuel to asphalt. The company has also created or collaborated with other companies that have become leading players in the development of Alberta's oil resources, and it remains deeply invested in western Canada’s oil patch...
The Kochs are also active in Canadian politics..."

"Among the most powerful men [Kochs] in the world whose holdings included major commercial investments in the Alberta oil sands, for years the Kochs have moved heaven and earth to protect the unrestrained pursuit of oil from environmental considerations."

Harper most definitively is the Koch brothers 'man in Canada' and Ez and the men at the Fraser Institute and now British Columbians for Prosperity, they all wear the same team jerseys.

I received a missed call from GMI on behalf of BC4P last week.
A look at 800 Notes and Who Calls Me? shows that they did a similar pipelines phone research campaign in May last year as well.
Well, that's one way of pinpointing which voters are on your side I suppose.

Is Vivian Krause involved with the BC4P outfit? She certainly beats the evil-enviroment-groups-funded-by-USA drum, but she has also complained about Ethical Oil misusing her research.

Maybe they decided to use her ideas without letting her have a say in this group. Like cannibals.

HollyStick : Krause was interviewed on Kootenay Co-op Radio on April 8 2014 about her work in trying to get funding transparency from environmental foundations.
Her remarks on BC4P are at the 19 minute mark :

Q : Moneytrail seems to be just a rehash of your research

Krause : No, they haven't used my research. They've got things all wrong. I wish they had used it - they wouldn't have got things so badly muddled up if they had actually read some of the things I've written.

Krause : Well they suggest that American [enviro] foundations are actually trying to encourage oil production. That's nonsense - they base that on one small little grant - it just doesn't ring true at all. And the other thing they say for instance - why aren't they [US enviro foundations] against fracking? Well they are - they are also funding various campaigns against fracking. They get the facts wrong.
I'm not involved with that group at all. They asked me to be involved but they wouldn't disclose their own funding sources so I wasn't willing to work with them.

It's a little uncomfortable to find it so easy to predict how those guys will act. I must have some crooked tendencies.

How stinkin' lame this is.

Just another attempt to smear a conservative professional woman, is this not?

Hang your head in shame. You're being used by a jealous lefty pundit to take a friend of mine down and I, for one, don't appreciate it. As a woman you should realize that when you pick on other women and smear them, that's why there are less women represented in media.

"Mills later downplayed the executive director's statements regarding funding, saying Lounds is no longer one of the key decision makers in the group. She added, that she is, along with a Board of Directors.

In the case of British Columbians for Prosperity, Mills said she has never worked for the Conservative Party. However, the society has some Tory links. Its communications manager, Brittany Allison, formerly worked in Prime Minister Stephen Harper's office as a policy researcher."

Dear Alise Mills
I want to let you know of my new book for your perusal.
'The Deliberate Corruption of Climate Science'
I have been silenced for 40 years by the MSM.
Thank you.
Tim
Historical Climatologist

Hello Marty. You know, you and Alise are both on twitter - you could let her know about Tim's new book there.