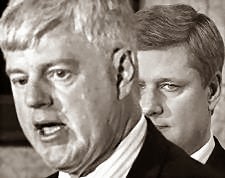 John Manley, chief of the Canadian Council of Chief Executives, was quite breathless in his Sunday Edition ode to corporate loveliness. Sure, according to Canadians for Tax Fairness :

"analysis of the top 60 companies listed on the Toronto Stock Exchange found only four companies paid the full corporate rate. More than half paid less than 10 per cent, and 13 firms paid less than five per cent."

but they contribute in "lots of other ways" Manley insisted ... like property taxes which you and I also pay so wtf, John?

Your Ode to Corps? Here you go - I fixed it for ya.


Shall I compare thee to a Larry Summers day?
Thou art more lovely and more temporary foreign workers.
Rough news do shake the darling Betts' Mcday,
No summer jobs thanks to thy corporate twerkers

Oft times too hot thy Eye of Sauron shines
And often is thy gold reposed offshore,
As every fair chance at fair work declines,
Thanks to Kenney's program - rotten to the core.

But thy eternal summer shall not fade
Nor lose possession of that $53B thou ow'st
Until Barbados cease to lend you shade
For thy eternal tax shelters that grow'st.

So long as men can breathe or eyes can see,
Thy greedy perfidy will live in infamy.

That's Brilliant! Did you do that yourself? And so close to the bard's 450th birthday as well.

John Manley should be deported and his assets should be seized by the Canadian Government. Probably David Cameron will take him along with Conrad Black. Manley has proven time and again that he is an absolute traitor of Canada. Canada gave him very generous opportunities, but he has proven to be an absolute turncoat. He cares nothing for this Nation that gave him myriads of privileges that very few of us receive, or even comprehend.

131220 : Yes I did! They're quite fun to do really - you should try it. Just take a fullspeed run at it, secure in the knowledge that no one will read past the first verse anyway ;*)

Anon : Not much of a fan of the asset-seizing and deporting of Canadian citizens actually. He is after all a Canadian problem.

When the idea of mounting a coalition to replace the Cons was floated in 2008, Manley's advice was to replace Dion instead and get back to the table with the Cons. He is the consummate ConservaLiberal.