Elections Canada throws in the towel 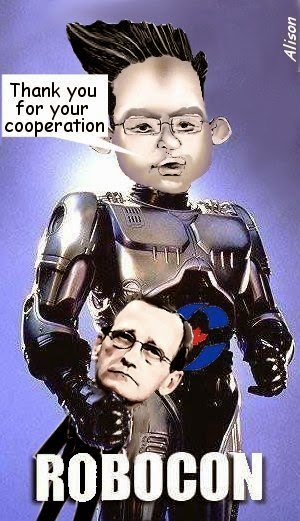 It would be unseemly for a sitting government under the cloud of elections fraud and voter suppression in 200 ridings across the country to ram through the Fair Elections Act mainly benefitting themselves, so today Elections Canada Commissioner Yves Côté obligingly threw in the towel on any further investigation into what Federal Court Judge Richard Mosley called :

"... it is not sufficient to find evidence of misdirection of an elector. There must be evidence of intention to prevent the elector from voting, or by some pretence or contrivance, to induce the elector to vote or not vote for a particular candidate.

"No such evidence was found."

Skippy was pleased though :

"Pierre Poilievre, the minister for democratic reform, said the report proves the Conservative party ran "an honest and ethical campaign" in 2011.

"We followed all of the rules and we won fair and square," Poilievre said Thursday before delivering a speech on controversial new electoral reforms proposed for the 2015 vote.

"That is what we've been saying all along and those who've been making baseless smears ever since have been once again proven wrong in the process."

Not that the Office of the Commissioner has shown much previous inclination to pursue evidence of election fraud in the last election, but his report shows he was hampered by "investigative challenges", due to "outright refusal to cooperate" on the part of witnesses.
Supreme Court Justice Louise Charron : "Some telemarketers retained by political parties simply refused to co-operate."
Unsurprisingly, the new Fair Elections Act declines to give him the power to compel witnesses.

So here is an example of what is presumably now legal in our new 'buyer beware' elections - a "misdirection of an elector" from Election Day in 2011, left on the phone of a librarian :

I'll save you the bother of looking up that phone number - it's Pierre Poutine.

Saskboy did an excellent rundown on the issues this morning and -updated- RossK reminds this is all just a redo of EC declining to pursue election fraud in SGI in 2008.
Back with more in a bit.

Update : So what exactly happened between an EC spokesey giving a completely bullshit reason 3 weeks ago for why their report would not be released until after the next election and its release today?
Is it a different report altogether?


Benson said the agency has decided not to report until after the next election.

“In light of the government’s announcement in the fall that it would introduce comprehensive legislative reform, Elections Canada decided to postpone the general enforcement report until after the next general election,” she said. “This was necessary not only to focus our attention and resources on the announced reform, but also of the difficulty of engaging stakeholders simultaneously on a parallel initiative.”

The...'It happened but we don't know for absolute certain that somebody did absolutely, on purpose, not vote because of it' declaration of non-pursuit has been used by E-C even before your 'before' Alison.

OTTAWA — A former RCMP superintendent says he’s never seen the degree of political control over the Mounties that exists now, and says it “does not bode well” for an objective police investigation of the Senate expense scandal.

"not a fighter", more of a yes man, not one to make waves.

Ross : Meant "before" as in just after 2011 election; have clarified in post.

Here is the previous Commissioner of Canada Elections 3 weeks after the last election on May 16, 2011 :

"There was no conduct reported that would bring into question the integrity of the election result overall or the result in a particular riding. Although misconduct was reported in several ridings, there is no complaint that it affected the overall result. There is some speculation in the media that the dirty tricks may have affected the result in some close contests.

The investigation of complaints regarding web based conduct - particularly third party conduct - is difficult, time consuming and may be inconclusive. The same applies to telephone communications that flow through intermediaries and foreign call centres. Consequently, the dirty tricks complaints which definitely occurred may not be resolvable, if the conduct is illegal under the Act."

But yeah, we do not forget Penn and SGI. Notable that Elizabeth May reported fraud in last election yet says EC never called her.

Thank god this report came out just in time for Harper to send 500 observers to monitor the election in Ukraine.

[Caveat: most things in my life these days are filtered through GoT)Sandor Clegane might have the right approach. http://www.youtube.com/watch?v=5g9zxduFtSM

Well, the normal immune response that prevents election frauds and our little Joffrey from manifesting have failed, are likely compromised from the RCMP to EC. While might ensure the Cons retain power for a considerably longer period of time, it also means when they do finally fall, it will be far messier than would have been the case if they had imploded sooner.

Harper just got a free pass to election fraud 202 for 2015 he passed 101 2011 now with flying colors A+++ (100%). Since it seems his unfair election act will pass, he will also go to the head of the class of election fraud graduate 202 and 303 all at once. Soon he will be teaching electoral fraud "How to kick sand in the eyes of a democracy" on its own beach with a smirk.

"The staff at the PMO have no allegiance to anything other than getting the Conservative Party re-elected..." -Elizabeth May.

How true E how true.

Boris : Ha! Don't even have to open that link to know exactly which one it is.