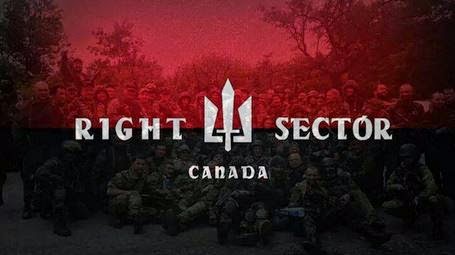 Alexander is particularly outraged about any mention that Ukraine might have a neo-Nazi problem, which he blames on :
"dangerous ideology. Which is present in our own city of Toronto! Which is present across Canada! Which comes to us through state-sponsored Russian channels that are preaching absolute poison."

while evidently being unaware Canada has a Right Sector chapter of its very own.

Perhaps he'd rather hear about it from the BBC :

or the Ukrainian ambassador to Germany last month :


"Alexander was followed as speaker by Andriy Parubiy, deputy chairperson of the Ukrainian parliament and founder in 1991 of that country's evocatively named Social-National Party, which the Wikipedia describes as having "combined radical nationalism and neo-Nazi features" before changing its name to Svoboda ("Freedom") in 2004.

In his speech Mr Parubiy said his fighters in Ukraine are standing for the entire civilized world.
He says "Canada has an “authoritative voice” on the conflict in eastern Ukraine and could help persuade the United States to send lethal weapons to Ukraine."

"This is going to be a great struggle," said Alexander, " We are just at the beginning of this struggle."
.
Posted by Alison at 2:33 am
Email ThisBlogThis!Share to TwitterShare to FacebookShare to Pinterest
Labels: Chris Alexander, Con fuckwittery, Ukraine

No Con ever met a great struggle against something they can't understand far enough away to not hurt them that they didn't like.

.. thanks for the disheartening reveal of the dubious mr Alexander.. he puts me in mind of a more shrill sour version of our equally dubious Squeaker of The House Scheer - both seem to be hiding or faking something - much like many of the current caucus.

The fundamentalist Reformatories seem less and less meek lately.. as if they smell or sniff the rot within the closeted Harper cabal. How odd.. they all smell & the stench is growing rank, so how do they presume is just Harper and his closest chosen?

If I could paint a vast mural, the hysterical mosaic referenced to the Perps with Perks.. they would all be portrayed the way they really are, how they have behaved.. as betrayers.. gutless cowards & bullies in their splendorous suits & shiny shoes

A great foul boat, creaking on crooked wheels across the land, plunging across river & creek, flattening culture & fouling society.. a sick & bestial crew of carpetbaggers, crooks, holier than thou screechers, and political preachers all puffed up pretend nation builders..

They are gothic robo failures and fakers, sneered at by the worst of them.. But all need to be parked somewhere somehow, perhaps half submerged in a great tailings pond of their own design

Great comment salamander. That is poetry. I once cut off the tail of a salamander as part of a science project. I was nine years old. The tail grew back. But there ended my biological science experiments. The horror, the horror.

It's always the fifties with these guys.

"Maybe Ukraine is in the place that it’s in because of mistakes that the United States and others made with regard to our policy jointly in Syria."

Well he's going to catch shit for that now, isn't he?

If only there was a way to melt their stupidity into an ingot and drop it to the bottom of a very deep lake.

Anyone else think he looks sorta bombed here?

yes, I had the impression he's bombed.