Fundraising at the mall - terror for the win 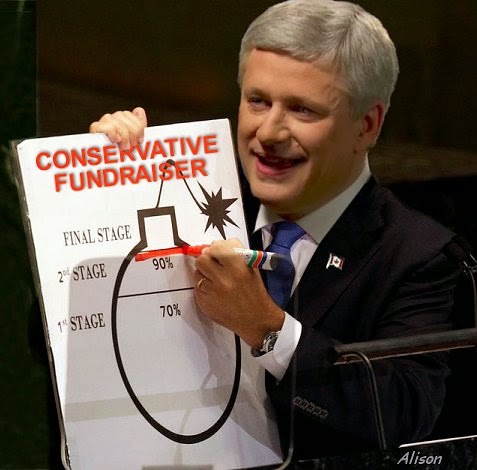 As one of our strongest supporters, you know the fourth quarter fundraiser of 2014 was our best in a decade. But we could raise so much more!

Why just this week, 20 cheerleading teams withdrew from a competition at West Edmonton Mall due to fears it would be bombed by a Somali terrorist group that has never committed a terrorist act outside of East Africa. Terror for the win!

But wait - there's more!
When we put our West Edmonton Mall mujahideen ad up on Facebook, many of the responses demanded we allow Canadians to open carry guns in malls to defend themselves against our ad.

Shockingly, the hug-a-thugs Justin Trudeau and Thomas Mulcair have not made any terrorist ads of their own.

Fortunately we can count on Prime Minister Stephen Harper to pass our new Anti-Terrorism Act to keep Canadians safe. At the mall. Remember, they hate us for our values at the mall.

Please send $15 and add your name to stand with our Prime Minister and his strong stable throbbing authoritarian majority here.
.
Update : Heh and heh
.
Posted by Alison at 2:08 am
Email ThisBlogThis!Share to TwitterShare to FacebookShare to Pinterest
Labels: Anti-Terrorism Act, Bill C-51, Con fuckwittery, fundraising

The al-Shababs began first took an interest in western malls about a month after the US droned their leaders in Somalia.

For the record, Kenya did not and does not "stand still" during or after Al-Shabaab's attacks. Life carries on, much as it did outside the immediate vicinity of downtown Ottawa a few months ago.

At least some of the trouser-tiddlers in the Conservative Party seem to actually believe terrorist propanganda, rather than cynically exploit it in their effort to consolidate power. I'd love to see an Opposition member actually call them out on this and then back it up with the evidence.

Love it, Alison. Thanks.

Boris: From the National Post at the presser after some of the Michael Zehaf-Bibeau vid was shown today:
"NDP MP Randall Garrison got RCMP Commissioner Bob Paulson to acknowledge that the Oct. 22 attack could have been prosecuted as terrorism under existing law, the implication being that the Tories proposed Anti-terrorism Act, Bill C-51, is unnecessary.
Little did Z-B know that his final video would become a tool in the hands of the government he despised."

In releasing some the Zehaf-Bibeau video, RCMP Bob Paulson said there was a danger that it could be used for terrorist recruitment. So naturally the cons put one up on facebook.

Brilliant. I'm passing this link on.