The Inconvenient Truth About Harper's Canada 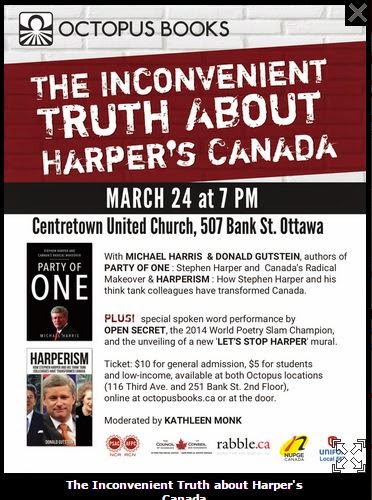 
I really really hope someone has arranged to tape this event and put it up online for those of us not in Ottawa.

Speaking at Goldman Sachs in New York last fall, Harper hinted at a greater military role ahead for Canada and leaving his mark on Canada :
"We've made it a policy of moving incrementally, but constantly, in our eight-and-a-half years in office," he said, citing changes to corporate taxes and a tougher law-and-order stance.
"I think that we've moved, and I think the country has moved with us."


"Stalin had small balls compared to this guy. Harper is probably the most dangerous human being ever elevated to power in Canada. How the population has acquiesced in following this son of a bitch, and to let him take over their lives, I’ll never know. You have to create warrior nations, they are not born. They have to be made. It is the preliminary step of a tyrant. And this son of a bitch incited Canada into becoming a warrior nation."


"Harper has simply made the calculation that if the way to give a chameleon a nervous breakdown is to put him down on plaid, the way to win an election in our disappearing democracy is to offer Canadians only two flavours — vanilla or chocolate.That means hitting the hot buttons, over and over. Before oil prices tanked, greed was the button of choice. Now it’s fear. It makes things starkly simple — black and white, good and evil.

As simple as War is Peace, Freedom is Slavery … and Ignorance is Strength. It’s a campaign designed for Idiot Culture. The only question is, are there enough idiots out there to put Harper over the top again?" .

.
Posted by Alison at 2:02 pm
Email ThisBlogThis!Share to TwitterShare to FacebookShare to Pinterest
Labels: Donald Gutstein, Harperism, Michael Harris, Party of One

.. the most citical challenge today, is to encourage, feed, drive, harass, insist, challenge.. mainstream media to lead the charge to inform the Canadian public... about what Stephen Harper represents.. and what his MP caucus represents.. and who they do not represent..

They certainly don't represent Canadians.. our dreams, needs or wishes..

The litany of what Harper & his MP caucus & Ministers have done that is completely counter to ordinary Canadian's interests, is critical.. but it must be hammered again and again by mainstream media...

The ideal of course would be ordinary Canadians challenging mainstream media to get to the bottom of all that is wrong about Harper et al.. the PMO, the thousands of 'Justice' lawyers, the Conservative Senators embroiled in Duffy/Wright, the lobbyists, the Energy Partners dictating omnibus budget items, or niqab nonsense, Fisheries failures, Election Fraud, racism, the bizarre 'stand with Israel' phenomena..the secrecy and obstruction.. the complete deceit

Understandably, mainstream journos have seen how Harper can lash out.. at charities, whitleblowers, individuals, even his own MPs.. but its going to take courage and smarts & glowing hearts to reclaim Canada from such dim shrill pond scum.. and media needs to know how many ordinary Canadians are behind them..

looks like they'll have a podcast of the event at least...