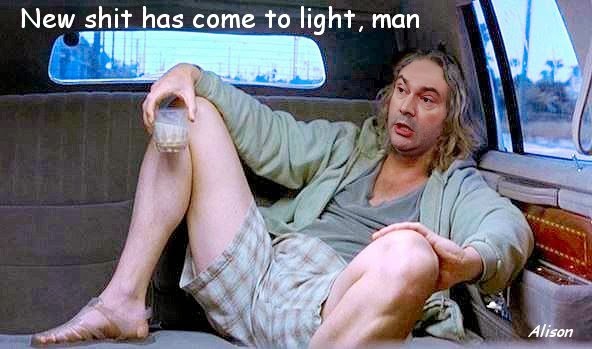 Last week DefMin Kenney justified why Canada was about to start bombing Syria at all :


"There are only five coalition partners doing airstrikes against ISIL terror targets in eastern Syria. The United States is the only one of those five that has precision guided munitions. That is a capability the Royal Canadian Air Force has so one of the reasons our allies have requested we expand our air sorties into eastern Syria is because with those precision-guided munitions our CF-18s carry we can be more impactful in the strikes we make against ISIL."

However, in Gen. Tom Lawson tries to dig Jason Kenney out of a bomb crater of his own making, David Pugliese noted that


"both Saudi Arabia and the United Arab Emirates, part of the current five country U.S.-led coalition bombing targets in Syria, have precision guided weapons and have already used them against Islamic extremists."

So the DND then trotted out a statement from Lawson defending Kenney :


"As stated by the Minister of National Defence, the Royal Canadian Air Force’s precision targeting capabilities make Canada a valuable partner in the fight against ISIL. ... Currently, only the United States uses these advanced precision-guided munitions in Syria..."

... which Kenney happily waved about in the House on Monday as his vindication against Pugliese's column. Note no mention of coalition partners either having or not having them - a good part of Kenney's justification for pursuing the US into the IS quagmire.

Department of National Defence sources say Lawson was pressured by Kenney’s office to issue his original statement supporting the minister."

Kenney wasted no time blaming the Defence Department for his own mistake about coalition partners having smart bombs in the House today :


So either Gen. Tom knew Kenney was full of shit but tried to back up his bs to the public anyway after being leaned on, or Canada's Chief of Defence Staff actually had no clue as to the current military capabilities or actions of our "coalition allies" Saudi Arabia, Bahrain, Jordan, Morocco, Qatar, and the UAE in bombing Syria, or our DefMin just bussed the Chief of Defence.

Not sure which is the worse possibility here really.

Ok great pic but you have to go with the whole clip : New shit has come to light

Of course Lawson knew. He's a fighter pilot himself and his entire career and the mission of the RCAF requires very detailed knowledge of other air forces and their capabilities, particularly those in the same warzone. [WIkipedia even tells you what air forces have what kind of smart bombs.]

The CDS lied in order to cover for Kenney's lie, and then lied about "new information coming to light" (he damn well knew the truth) because the Kenney's office pressured him to. Nevermind that Lawson's last gig before retirement is leading the military into the sketchiest war it's ever fought. Sad, really.

For here
Am I sitting in my office
Far above the street
Canada is blue
Is there nothing I can do?

Do you remember a guy that's been
In such an early song
I've heard a rumour from Ground Control
Oh no, don't say it's true

They got a message from Distraction Man
"I'm happy, hope you're happy too
I've covered all I've needed to cover.
Sordid details following"

Ashes to ashes, bunk to bunkie
We know General Tom's a flunkie
Strung out in Kenney's lie
Hitting an all-time low


I find it shocking that a journalist is glaringly better informed then the minister of defense who is about to authorize the use of military force, and the chief of the defense staff.

I find it shocking that a journalist is glaringly better informed than ... chief of the defense staff.

Well then I did a crappy job of writing the post because I thought it said the opposite of that. I don't know any better than you of course but here's my take - hopefully clearer this time.

Here is the carefully worded letter Gen. Lawson wrote on the DND site.
Re smart bombs/PGMs he says : "This is a significant capability which, currently, only the US employs in Syria."
As I note in the post - nothing in it about coalition allies having or not having smart bombs as Kenney stated. Kenney overreached , I'm guessing, because the obvious Canadian response to allies having them would be - well it"s their fight, why aren't they using them?
He never should have brought it up in the first place so Lawson's letter softens that a bit for Kenney.
Remember Pugliese wrote that allies have 'em, not whether they were deploying them.
So Lawson's later correction that another ally besides the US is indeed using them was all Kenney needed to stand in the House and blame Lawson/DND for misinforming him, even though that wasn't even the original issue.
I realize this is all kind of parsey and the reality is the DND takes its orders from the DefMin and doesn't embarrass or argue with the DefMin but I thought Kenney was spectacularly graceless in how he dumped on Lawson.

Point taken, reading the letter the correction indicates the "best information" which is altogether disconcerting from the CDS whether through MOD pressure or not. Posssibly a sign of too much integrated communication policies at work.

I suppose as an outgoing CDS, Lawson is going to be point man for all of the mission's mistakes until the fall where he steps down (basically the election) including the minister's mistakes....which kind of throws ministerial responsibility out the window.

I still think my view is that the minister should rather stay mum on subjects he hasn't been accurately briefed on, as this entire operation is already a quagmire and the further into this morass we embroil ourselves in, the more likely these false "stances" will be used to justify further escalation.

If Vance is tapped for this position, we might see more of the odious Petraeus-type pandering as they're cut from similar cloth.

Anon@10:34 : Staying mum isn't Kenney's strong suit within a government of making up *facts* to justify whatever they've already decided to do to stay in power.
Meanwhile Minister of Citizenship and Immigration Chris Alexander is helping out by plumping for a new Cold War.

Vance to be named next Chief of Defence Staff