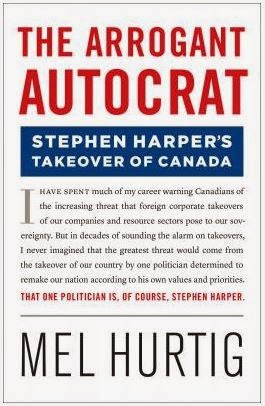 New book coming out next week. From the presser:

"Passionate Canadian bestselling author and publisher Mel Hurtig calls upon Canadians to save our country, restore democracy, and adopt urgent measures to protect the future.

Just months from the general election, political activist Mel Hurtig now launches an extensively researched polemic, The Arrogant Autocrat. In it he argues that Stephen Harper's government has had a devastating impact on the country, radically altering its democratic and economic fabric.

Hurtig catalogues a litany of abuses, from violations of parliamentary procedure; controlling and destroying information; hobbling or axing sources of information; undermining the rights of Canadians; the use of the federal tax agency to frighten and control civil society; and badly mismanaging the economy - despite loud claims to the contrary.

The Arrogant Autocrat is a shocking portrayal of an admired, democratic country under seige from a far-right prime minister. It is a must-read for all Canadians and a clarion call to take back our country and restore democracy before it is too late."

An associate of Hurtig's advises there is information found herein not covered in the rest of our pre-election summer reading list compiled by Sandra Finley :

.. excellent ..
Seems a must read.. along with the others
Thank you for this.. and all other posts !

So many books, so little time! I'm definitely blowing my book budget this year. Harper's an inspiration---I haven't even finished Stevie Cameron's "On The Take"---which, like many of this genre, end up at out Free Store eventually. I still have a shelf full of Persky, Garr, et al, which I still peruse once in a while.

This one looks pretty good too. Thanks for the review!

I would have called the book the arrogant incompetent.