Say, remember last year when Rachel Maddow was absolutely gob-smacked to learn that Kinder Morgan had included the economic benefits of oil spills in its National Energy Board application to triple the size of the Trans Mountain pipeline? 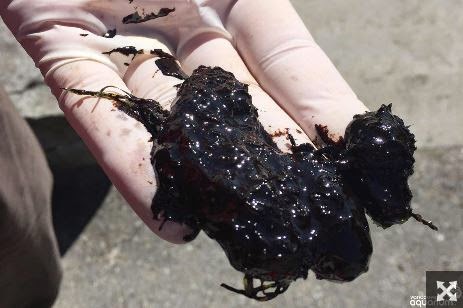 So I guess we owe KM an apology here.
They were right - there are economic benefits if you're a KM shareholder.
KM would have liked to get that apology last year, claiming that they were obligated to mention the upside of oil spills in their pitch to NEB.

Unfortunately NEB said that was crap.


To which Press Progress replied  :On what fucking planet does this look like a "world class" oil spill response?   (I might be paraphrasing slightly here)

World assness in progress....
Spill reported at 5 pm by a sailor.
Nine hours later at 2am there was a boom in place around the leaking bunker fuel now wending its way to the beaches of Kitsilano and West Van.
And finally, 12 hours after the leak was first spotted, someone remembered to let the City of Vancouver in on the secret.

So how could it possibly have taken so long to get their shit together? 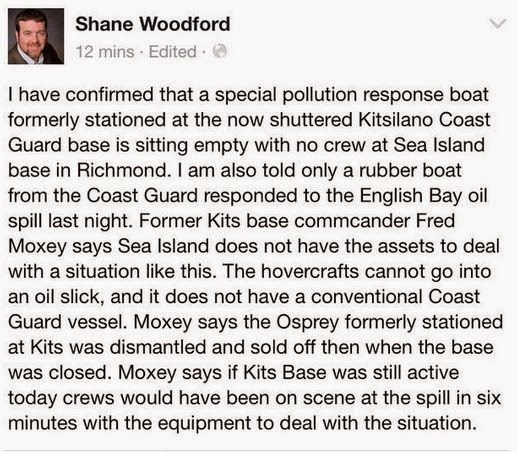 Ok here's a clue. The Cons shut down the key responders in 2013.

We had a marine safety response purge when the Kitsilano Coast Guard base - 6 minutes away from the bunker fuel spill  - was shut down to save $700K a year, and the special pollution response boat with its 300 meters of self-inflating oil- containment boom was moth-balled off to Richmond.

Like why are we here first ? ...
Volunteers were out cleaning up the gunk off the shoreline themselves and putting up home-made signs warning to keep dogs and children out of the oily water. Good on them. Still, sea birds are notoriously poor readers and some had to be rescued when they got soaked in the gunk after not obeying the signs.

CBC reports the leaking vessel was on its maiden voyage after being launched from a Japanese shipyard in February. So - a brand new vessel then.

According to Tanker Free BC, the proposed Kinder Morgan Trans Mountain pipeline and tanker project "would see an increase from the current 80 tankers a year to over 400 tankers a year carrying primarily tar sands bitumen which is more likely to sink in the marine environment potentially causing significant harm."

Too bad we don't have some kind of ocean traffic control tower to co-ordinate emergency response communications for the next one. ..... Wait for it .....

Fun fact : "Vancouver will also have to deal without a marine traffic communications centre (the ocean's equivalent to an air traffic control tower). The Conservatives shut that down last month, consolidating the Pacific Coast's operations to Victoria and Prince Rupert."

Tyee : Vancouver's Preview of a Spill from Hell
.
Posted by Alison at 4:19 am
Email ThisBlogThis!Share to TwitterShare to FacebookShare to Pinterest
Labels: Environment, Kinder Morgan, oil bidness, pollution, separation of oil and state, tarsands-to-tankers pipeline

Now imagine the spill was of dilbit As Kalamazoo taught us the diluents would gas off causing much sickness in the area population and the bitumen would sink to the sea floor well before this world class response kicked in.

Fortunately this is a small scale spill, it does foreshadow what would happen if a tanker had a problem.

It's utterly criminal that we allow this kind of traffic in our waters when we have no means to mitigate a spill that would do untold harms to the environment and the economy.

Well, I'm sure the pony soldiers are helping out by dutifully photographing everyone helping out on Kits beach so they can phone them (or their kids) later just in case they get any ideas about maybe protesting somewhere.

You know, between this, the Duffy trial, Harper must be having a helluva time thikning about when to call an election...Expect them to kick the war up another notch or come up with some other distractithon.

Fat ass sack of rancid shit James Moore has his "heckuva job Brownie" moment and no one in our in-bred syphilitic courtier news media reminds him of the post Katrina moment that helped reveal GWB as the gibbering idiot he is and whose company Moore just joined.

Ain't we got fun.

Most appalling is the 80% recovered figure that keeps getting bandied about when that's physically and technically implausible on that time scale.

So of the total 2700 litres, there's no statement on how much of that is "recoverable."

Vice had an interesting clip of a small spill in the Midwest that the EPA were picking up and basically there's NO WAY that 80% of anything was recovered by the time the Feds statement's on the defensive started being issued. It's a complete fabrication.

The world class system they keep repeating has less to do with technical abilities to respond, contain and remove the oil spills but with their little mentioned increase in liability for oil spills up to a rather low billion dollar ceiling. That's why you keep hearing the feds talk about "the polluter has to pay"

Lucky it wasn't worse. It's bad enough to bring forward some much needed changes though.

The Harperians won't be bringing forward any much needed changes, Anon.

If anything they'll remove some more resources.

And when the next one is worse they'll remove some more resources.

In an election year, every little bit will contribute to their ousting. There's what less than 8 weeks before they rise from the House?

The Strait reports the government called in Western Canada Marine Response Corporation, a apparently company owned by other oil companies and Kinder Morgan.

That is immoral and stupid.

That's like companies regulating themselves, getting us to pay for the damage when things go wrong, plus we pay them to fix their own mistakes. Capitalism gone nuts.

Also, World Class is a very odd standard. If those who control the industry have only poor solutions, the that is the world standard. Not good enough.

And the word 'restored" is not appropriate. After the 'clean-up' things are not as before - not by a long shot.

Look, would you buy a restored Porsche for the price of a new one? And that's only a machine, not a living part of the earth.

It's said the fox will slowly wade into the water with the tip of a stick neatly held in its front teeth, slowly submerging until just it head, then just its face, then just its nose is above water---and then as it finally submerges entirely, it lets the stick go. Why? Because all the fleas scrambling toward the fox's head (a familiar route towards their watering hole about the fox's eyes) eventually have to climb out onto the stick to keep from drowning---cue "Gilligan's Island".

Perhaps we could entice James Moore, the CSIS, RCMP and all the rest of the C-51ers summoned to surveil interference with Conservative policy (in this case the termination of the Coast Guard station) to stand guard aboard their icon of of World Class Oil Spin, while we quietly slip its mooring and, like the Fox, just let it go.

Wouldn't that be nice?

I really liked this part of the article, with a nice and interesting topics have helped a lot of people who do not challenge things people should know.. you need more publicize this so many people who know about it are rare for people to know this... success for you.....!!!