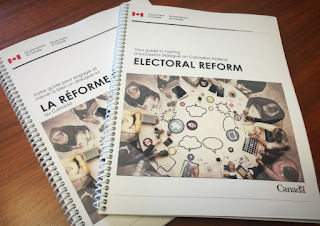 Gives her personal perspective on why we should move beyond FPtP. FPtP is 19th century system not designed for multi-party system. We need stronger link between will of voters and election results. Since 1960 we've had 10 elections giving majority results but only in one in 1984 did winning party receive more than 50% of the vote. This leads to lower voter turnout because of feeling their vote doesn't count.

FPtP tends to favour parties with regional rather than national appeal.

In last election less that 40% of MPs were elected by majority of constituents, including herself, while 63% of Canadians voted for parties advocating alternative to FPtP.  So what type of system would best replace FPtP while recognizing that no one system is perfect.

Government not prepared to proceed without broad support, must reach Canadians disengaged from the electoral system. In 2016, facebook and twitter are primary tools for engagement, cannot be overlooked [Take that, Jason Kenney, not here because he's currently announcing his Unite the Right campaign for Alberta].

She brings up online and mandatory voting as two means of increasing participation.

She is not in favour of a referendum - they do not lend themselves to deciding complex issues and less than half of Canadians have participated in recent ones.
Stascan study after 2011 election : Under 45s, high school grads, single, unemployed, immigrants, renters, and rurals vote in lower numbers than over 45s, uni/college grads, married, employed, Canadian-born, home owners, and urbans.
A referendum would reflect these numbers, an incomplete picture of Canadians.

Questions
All CPC MPs - Scott Reid, Gerald Deltell, and Blake Richards sitting in for Jason Kenney -restricted their questions entirely to whether she would accept or put in place the necessary mechanisms to hold a referendum. Referendum, referendum, referendum. Monsef answered CPC Scott Reid that if that was what listening to Canadians and a consensus on the committee recommended, then "It would be incumbent upon me and the government to take it seriously".
Scott Reid tries again, badly wants a yes or no. She doesn't give him one.

He is particularly agitated that a referendum becomes impossible if it is not aligned with the Elections Act between when the committee winds up in December and the next election in October 2019. I'm not sure where this sense of urgency originates. Marc Mayrand told PROC in May :"Six months minimum to set up a national referendum" .. because legislation on referendums has not been updated since 1992.

"We haven't made up our mind about any given system.... This isn't about us; this isn't about our parties. This is about Canadians - their electoral system. ...We don't do hiring for the PCO."

Luc Theriault, Bloc, is concerned Monsef's dept has a budget of $10.7M to conduct parallel research to the committee which only has $300K. Monsef explained Board of Internal Economy sets budget and the dept money is to reach out to people not traditionally engaged with the process.
Did he just also make a case for holding a referendum? I think he did. That shifts the committee dynamics a bit.

Elizabeth May : Liberal Speech from the Throne promised "In order to make sure every vote counts, 2015 will be the last election held under FPtP. I intend to hold you to that promise." She notes the first parliamentary committee to study PR to replace FPtP was in 1921, and another in 1937. Plus "1970 was the first time ever the identity of the candidate became subservient to the name of their party with the party named next to candidate on the ballot."

May asks if majority Liberal government is willing to choose a voting system that goes against their own self-interest.
"Will you give us your word that you will fight for whatever this committee recommends?"

Monsef does not answer yes, says she looks forward to their report. Huh.

May reads 2 questions from twitter, one about the skewed "truth in advertizing"surrounding this debate. Monsef says debate must be non-partisan and she is counting on the good work of "our free and independent press" to present the issues fairly.   Huh.

Monsef walked out of the committee 15 minutes later to a scrum of seven questions from "our free and independent press". Five were about holding a referendum and whether or not time was running out to have one.

Monsef is serious about bringing Canadians into the conversation and very much wants the ERRE committee to do its job.

What it reports is up to it, but I can see how this much "creative" mandate might confuse one or two people on it.

How any report is received by the government is unpredictable at this time. Still, if the committee is dominated and distracted by referendum talk, then it won't do its job and the report will be deficient, the govt will have a lot more licence to do as it pleases.

Elizabeth May : Liberal Speech from the Throne promised "In order to make sure every vote counts, 2015 will be the last election held under FPtP. I intend to hold you to that promise."

Wonder what the chances are of the libs breaking that campaign promise ? ? ? ?

Bob, honestly, I think they'll keep this one. The Libs I don't think stand to lose in some form of PR or ranked ballot, but it would effectively exclude the Tories from ever seeing a majority government again and thereby contribute to their marginalisation as a national political force in Canada. They couldn't break 40% under their last leader and their aging and expiring boomer base is being replaced by millennials and Xers, who mostly occupy the Green/NDP/Lib spectrum.

I think this photo explains the intractable Tory problem: http://i.huffpost.com/gen/4481496/images/o-CONSERVATIVES-PRIDE-PARADE-facebook.jpg
White, forced smiles (the sterile eyes give it away, genuine smiles change the eyes), nervously huddled together as if hiding behind a cluttered unreadable banner that looks like the internet from 1995. Compare to Trudeau (relaxed, happy and engaged), and BLM who brought in some seriously righteous politics back into play.

What kind of system replaces FPTP is a different question and I worry the committee won't find consensus and/or become hijacked with partisan (ie Tory) grandstanding over referenda or some other bullshit. So their report will be weak. May gets it but I'm not sure about the rest of them.