Another Clark Park Day in BC

April 2014 Natty Post: Christy Clark once served as chairwoman of B.C. company that she has promoted since becoming premier 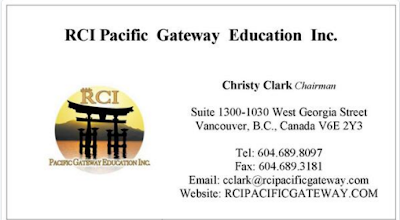 "The 2007 document has surfaced one week after it was revealed that the Premier was a partner in her former husband’s lobbying firm, which formerly listed its office at her residence and boasted such clients as Enbridge and B.C. Rail.

In the fall of 2007, Ms. Clark entered into a two-year agreement as chairman and board member of RCI Capital Group’s RCI Pacific Gateway Education Inc., a wholly owned subsidiary of the investment firm.


Since becoming Premier, Ms. Clark has actively promoted RCI on official trade missions to Asia — recently signing a memorandum of understanding on behalf of the B.C. government in securing $1-billion in overseas investment..." 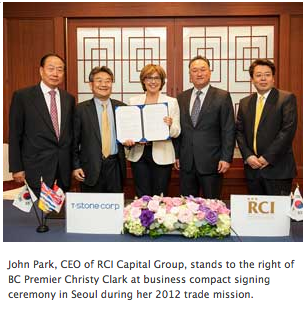 No I never worked for RCI said Christy, and RCI Capital's John Park gallantly came to Clark's defence, saying he'd never so much as even met her back then, much less paid her the first of three annual director's fee installments of $4,000 due her within 120 days of her RCI appointment.
No, it was her then husband, Mark Marissen, Stephane Dion's campaign manager, that Park had hired.
I guess that's just a spousal Chairman biz card then.

In December 2013, Clark appointed RCI managing director Tenzin D. Khangsar as chair of B.C.'s Multicultural Advisory Council. Khangsar was a former chief of staff to both Jason Kenney and Tony Clement and a key CPC ethnic campaign strategist for the Cons in 2011.

Still with me? Ok, flash forward to the Vancouver Sun two days ago featuring yet another Clark Park Day photo op : 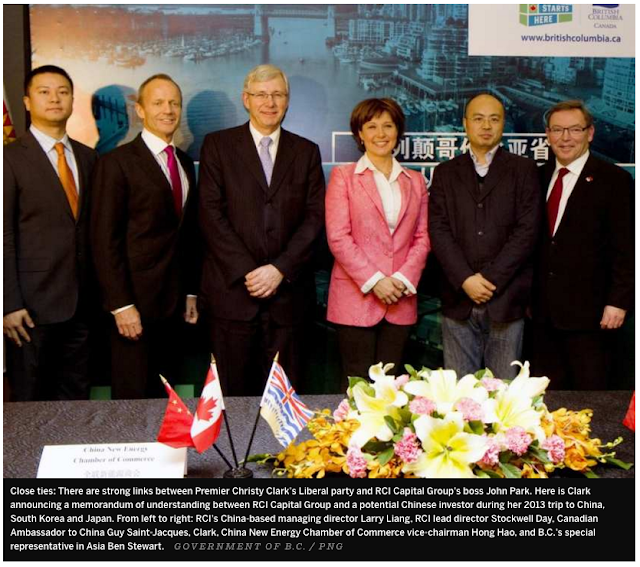 "A B.C.-based company says it has brought $2 billion to Canada under the Quebec government’s cash-for-visa program, a scheme that some say is a factor in Vancouver’s housing affordability crisis.

Vancouver-based RCI Capital Group, which helps resource companies develop strategies and raise money in Asia, has a Montreal-based subsidiary that has been active for years in the Quebec Immigrant Investor Program.

The Quebec program has become increasingly controversial in Metro Vancouver as critics point to it as one of the drivers of sky-high housing prices, since the vast majority of successful Quebec applicants immediately establish themselves in Toronto and Vancouver."

That would be the Rennie who recently suggested action to curb foreign real estate investment would start a trade war. "China buys $6 billion a year in British Columbia exports," he said. "Are we going to tamper with those jobs and our economy?"

Gordon calls out those who fund political parties.

"The fundraising is being dominated by prosperous developers and others closely tied to the housing boom," he writes. "This is the second lesson about housing market politics from the past decade: inside players, with large vested interests, are willing to shovel over massive amounts of money to political parties to keep the boom booming."


"Confidential briefing for CRA auditors outlines strategy to tackle suspected tax cheats who do not report global income or who ‘flip’ homes – but reveals that last year, there was only one successful audit of global income for all of BC."


"B.C. is one of the few jurisdictions in the world that welcomes political donations from foreign individuals and corporations.The B.C. Liberals have in recent years received hundreds of thousands of dollars from offshore real estate developers, mining companies, railways and others. At least indirectly, the B.C. Liberals have even received donations from foreign governments, specifically China."

Around the world, B.C. stands out for its weak regulations against special interests manipulating public policy."

Just another Clark Park Day in BC.

The B.C Libs are just a renamed Socred party, which in turn was just a renamed Conservative party. And like many conservatives they believe that a strong economy is one that lets everyone benefit if they're smart enough.. oh and have the connections, like most politicians just happen to have. So it's just business as usual is all, nothing to worry about, even if everything they do just benefits a select few. Just saying...

I believe I'll go take a shower now to get rid of this slippery/slimy feeling . . . .