Are we done with this yet? 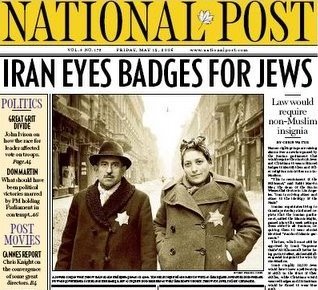 No, as Canadians we are not done with it.
Not by a long shot.

National Post is certainly done with it of course. They pulled the online version of the story after it was roundly debunked, and issued the most tepid of retractions, without any apology for having been used as a psy ops dupe. Except they still have their NaPo Sound Off! page up, featuring the question : "Is Iran turning into the new Nazi Germany?"
No word on how their bullshit editorial from neo-con Amir Taheri featuring the now discredited line : "Jews would be marked out with a yellow strip of cloth sewn in front of their clothes" became a front page news photo of Hungarian Jews in WWII above copy referring to the Holocaust.

Harper is also done with it, having used the occasion to strike an entirely inappropriate tough guy pose :
"The prime minister couldn't vouch for the accuracy of the newspaper report, but he added that Iran was capable of such actions and compared them to Nazi practices.
"Unfortunately, we've seen enough already from the Iranian regime to suggest that it is very capable of this kind of action," Harper said."

Ah yes - 'Holocaust capable' even if they're not yet currently manufacturing holocausts.
Now where have we heard that phrasing before?
Harper continues :
"We've seen a number of things from the Iranian regime that are along these lines . . .
"It boggles the mind that any regime on the face of the Earth would want to do anything that could remind people of Nazi Germany."

You mean like arbitrarily running a front page picture of Jews wearing yellow stars? That sort of thing?

But here's why we aren't done with it. Despite NaPo's tepid apology-free retraction, the following papers are choosing to run the story anyway : The New York Post with an edited and even more inflammatory version, the Washington Times, the Sydney Herald, the St Petersburg Times, and numerous smaller papers. The Jerusalem Post has posted a retraction to theirs, but as of this writing, the Canadian Jewish Congress still has the original NaPo story up, sans picture and NaPo retraction.

So out it goes into the world, where weeks from now when Bush is ramping up support to invade Iran, he can make some oblique reference to Iran and the Holocaust in the same sentence, and readers of these and other papers will nod their heads and say, "Yes, Iran is Holocaust-capable, I read about that somewhere".

No, unfortunately we aren't done with it. And because it will undoubtedly disappear soon, here's the text of the original story >>>


Iran eyes badges for Jews by Chris Wattie
Human rights groups are raising alarms over a new law passed by the Iranian parliament that would require the country's Jews and Christians to wear coloured badges to identify them and other religious minorities as non-Muslims.
"This is reminiscent of the Holocaust," said Rabbi Marvin Hier, the dean of the Simon Wiesenthal Center in Los Angeles. "Iran is moving closer and closer to the ideology of the Nazis."
Iranian expatriates living in Canada yesterday confirmed reports that the Iranian parliament, called the Islamic Majlis, passed a law this week setting a dress code for all Iranians, requiring them to wear almost identical "standard Islamic garments."
The law, which must still be approved by Iran's "Supreme Guide" Ali Khamenehi before being put into effect, also establishes special insignia to be worn by non-Muslims.
Iran's roughly 25,000 Jews would have to sew a yellow strip of cloth on the front of their clothes, while Christians would wear red badges and Zoroastrians would be forced to wear blue cloth.
"There's no reason to believe they won't pass this," said Rabbi Hier. "It will certainly pass unless there's some sort of international outcry over this."
Bernie Farber, the chief executive of the Canadian Jewish Congress, said he was "stunned" by the measure. "We thought this had gone the way of the dodo bird, but clearly in Iran everything old and bad is new again," he said. "It's state-sponsored religious discrimination."
Ali Behroozian, an Iranian exile living in Toronto, said the law could come into force as early as next year.
It would make religious minorities immediately identifiable and allow Muslims to avoid contact with non-Muslims.
Mr. Behroozian said it will make life even more difficult for Iran's small pockets of Jewish, Christian and other religious minorities -- the country is overwhelmingly Shi'ite Muslim. "They have all been persecuted for a while, but these new dress rules are going to make things worse for them," he said.
The new law was drafted two years ago, but was stuck in the Iranian parliament until recently when it was revived at the behest of President Mahmoud Ahmadinejad.
A spokesman for the Iranian Embassy in Ottawa refused to comment on the measures. "This is nothing to do with anything here," said a press secretary who identified himself as Mr. Gharmani.
"We are not here to answer such questions."
The Simon Wiesenthal Centre has written to Kofi Annan, the Secretary-General of the United Nations, protesting the Iranian law and calling on the international community to bring pressure on Iran to drop the measure.
"The world should not ignore this," said Rabbi Hier. "The world ignored Hitler for many years -- he was dismissed as a demagogue, they said he'd never come to power -- and we were all wrong."
Mr. Farber said Canada and other nations should take action to isolate Mr. Ahmadinejad in light of the new law, which he called "chilling," and his previous string of anti-Semitic statements.
"There are some very frightening parallels here," he said. "It's time to start considering how we're going to deal with this person."
Mr. Ahmadinejad has repeatedly described the Holocaust as a myth and earlier this year announced Iran would host a conference to re-examine the history of the Nazis' "Final Solution."
He has caused international outrage by publicly calling for Israel to be "wiped off the map."
Iran does not yet have nuclear weapons, but Tehran believed by Western nations to be developing its own nuclear military capability, in defiance of international protocols and peace treaties.
The United States, France and Israel accuse Iran of using a civilian nuclear program to secretly build a weapon. Iran denies this, saying its program is confined to generating electricity.


cwattie@nationalpost.com
.
Posted by Alison at 1:40 am
Email ThisBlogThis!Share to TwitterShare to FacebookShare to Pinterest
Labels: Hitlertude, Iran, media bias, NaPo

And if we don't get to the bottom (or top) of the five W's wrt to where this came from and how it turned into that front page fabrication, we are dupes.

My money is on Antonia Z.

And why, I wonder, did they pick the front end of a 3 day newscycle deadzone to push this thing anyway?

Is it because they know that most mainstream press editors in the center of the Canuckistanian Universe took off for cottage country Friday morning to open the season?

Ross : Did you also see this at Firedoglake?

Re timing. Maybe they didn't expect it to get debunked this fast either.

Alison, do you have a copy of the original story by Chris Wattie that got pulled? (Or do you have a suggestion on where one can be found?)

I'm interested in how that first story phrases the "confirmation" from the Simon Wiesenthal Center, particularly if it mentions a name.