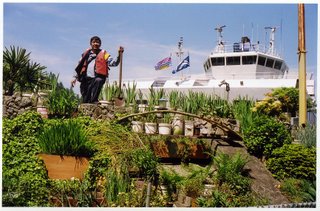 Next time you're pulling into the Horseshoe Bay Ferry Terminal, have a look down between berths two and three right where the ferries dock and you'll see a lovely little garden behind the 'Employees Only' fence. For the past 30 years, BC Ferries employee Wing Sun has spent his coffee breaks on the little concrete ledge called a wing wall - starting seeds in pots, sifting manure, watering, transplanting, and deadheading - as ferries pull in and out on either side of him. That's one just coming in behind him above.

For years I'd seen five gallon buckets with plants in them stashed here and there around the terminal during renovations, but what I hadn't realized was that this garden is the unpaid work of one man on his coffee breaks.

Stone planters carrying symbolic inscriptions and made from rocks off the beach, little bugs fashioned out of nuts and bolts found lying around the terminal, a driftwood arch, and his paintings such as this one on the side of his potting shed: 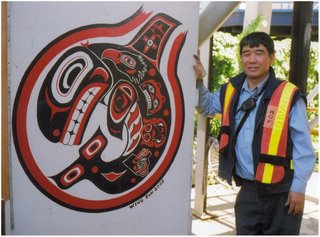 If you stop by when he's on a break, he'll give you a life jacket to wear in case you step off into the drink and take you on a tour.
Posted by Alison at 8:09 am
Email ThisBlogThis!Share to TwitterShare to FacebookShare to Pinterest

I love this guy!

that is way cool!
i like the way the crew has had a barbque running for several years, makes it like a family gathering kind of thing.

thanks for posting this one, i'll have to check it out soon!!!

I read your rantings every day, and sometimes I wonder, how you can get so upset about things that you cannot, possibly, have any control over, whatever, and how you might have a tiny speck of hope to change them. Then, by happenstance,I read this post. I have to say, with all sincerity; what a wonderful soul you have.

snicks and scout :
I know he'd love more people to see what he's done. My pics don't do justice to what an anomaly that garden is amongst all the concrete and steel and people rushing by it.

senor : A tiny speck of hope more than silence would provide. It's only gathering information, senor, and passing it on. But thank you.

slowgirl : phl&bt@p !
See how nice senor is to me? Please do try to stay on topic.

WOW! Thanks for this bright ray of sunshine - I'll stop by on my next visit to Bowen!