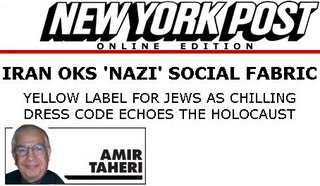 Say, isn't this the exact same Amir Taheri article that sparked all that hysteria over at the National Post four days ago? The one that states "Jews would be marked out with a yellow strip of cloth sewn in front of their clothes".
Why, yes it is, and with nary a mention of the thorough debunking it received in the meantime.

A number of blogs linking to it are claiming that it having been republished after the National Post retraction means that it must be true after all.
No it doesn't. It just means Taheri is still a liar.

Update : "PRESS RELEASE: AMIR TAHERI ADDRESSES QUERIES ABOUT DRESS CODE STORY
by Amir Taheri
Benador Associates May 22, 2006
Regarding the dress code story it seems that my column was used as the basis for a number of reports that somehow jumped the gun. As far as my article is concerned I stand by it."

Jumped the gun? Jumped the gun?
More like jumped the shark.
Posted by Alison at 2:54 am
Email ThisBlogThis!Share to TwitterShare to FacebookShare to Pinterest

Who sent it to the SWC in the first place?