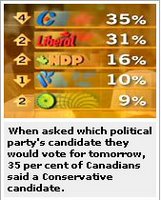 In a Strategic Counsel poll of 1000 Canadians taken in the two days after the budget speech, a combined 6% increase in approval rating was given to those parties to the left of George Bush.
The Greens, with neither a leader nor any hope of forming the opposition : up 2%.
The NDP, who royally pissed off their base by bringing down the Libs and saddling the country with the Cons : up 2%.
The Liberals, disgraced former government also with no current leader : up 2%.
The Cons, a day after presenting a budget that promised $1200 a year per child : down 4%.
The Bloc, new best friends to the Cons : down 1%.

The big news here is that despite promoting a climate of autocratic secrecy, appointing an unelected campaign manager to the Senate and 'selecting' a Lib MP for his cabinet, pissing off the press, gutting accountability and funding for the environment, blowing off the Kelowna Accord, refusing a vote on Canadian troop deployment in Afghanistan, not meeting the coffins of soldiers and making flag masting an issue, screwing with our tax credits, and selling out to the US on soft wood lumber, Harper's public approval rating is still slightly higher than that of George Bush.
So he must be pretty happy with that.
Posted by Alison at 3:08 am
Email ThisBlogThis!Share to TwitterShare to FacebookShare to Pinterest

A valid question, given his giveaway with respect to NAFTA (the softwood surrender), and now his brushing aside of the Kelowna Accord, which Premier Campbell rightly calls a "moment of truth". The Premier was right: The honour of the Crown is at stake. It was at stake with the NAFTA dispute over softwood.

Does Prime Minister Harper have the same view that President Bush has as regards the duty of the head of a state to honour treaties and accords?

Or are we seeing the beginning of Harper's agreement with Bush that he, as Prime Minister, is above the law?

i donèt quite get it....i contributed to false polling by voting over 400 times for the cons. maybe i should have photoshpped my fake poll sheet better , , then i would be a true con-artist.

And what makes the swing even more noteworthy is the fact that 'Allan Gregg and His StrataCons' are historically a push for all things to the right side of the ledger.