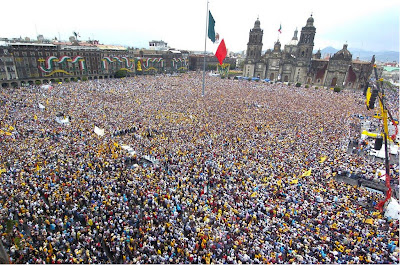 It's 1.2 million people marching on Mexico City in 2006 to denounce the abrogation of their right to fair democratic representation by their government.
.
You know why I'm posting this picture.
For the second time in a year, Steve the Despot and Her Excellency of the Rubber Stamp have dismissed Parliament to avoid facing accountability for government actions. All 37 bills before the current Parliament will die, the motion to disclose government documents relating to the cover-up on Afghan detainees will die, parliamentary committees cannot sit, and by the time Parliament eventually resumes on March 3, Harper will have appointed 5 new Cons to the Senate giving him a possible majority on the Senate committees.
And he can do all this secure in the knowledge it's unlikely even one-millionth the number of protesters who marched on Mexico City to defend their right to a fair government will be marching on Ottawa.
.
So why is that?
We blame the corporate media, we blame the spineless opposition, we blame the non-voters.
We go shopping, we look down our noses at the US, we send each other cute pictures of cats.
How's that workin' for us so far?
We have a government elected by 20% of us which has set a precedent to dismiss Parliament whenever it gets into trouble.
.
Coyne ... Coyne! : "As Canadian democracy spirals further down the drain : In what other democracy is it permissible for the government of the day to hide from the legislature for months at a time?"
.
Siddiqui : "The extent of Harper's misuse of power becomes clearer when you realize that the Conservatives are replicating some of the worst practices of the Republicans under George W. Bush and Dick Cheney."
.
Boris : Resistance
.
One day we will look back on this time and say that this was when we lost it - the possibility of turning on our comfy little oligarchy into something that actually represents us.
.
Posted by Alison at 10:20 pm
Email ThisBlogThis!Share to TwitterShare to FacebookShare to Pinterest
Labels: proroguing democracy, protesters, unfit to govern

I asked at our place and still don't have an answer: Will the CPCCA also suspend their hearings until March? (They had three scheduled.) I'd like to hear a journalist put that question to Reid or Silva. (I keep thinking of questions journalists could ask ...)

I saw your post at Pogge, Skdadl, but didn't know the answer.
I see NGO Watch, the rightwing Israeli lobby group/think tank that Jason Kenney's Mr Infandous cited in his slag on KAIROS, has made a submission to the CPCCA complaining about KAIROS.