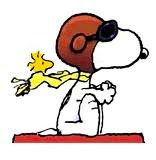 Dimitri Dogfight Soudas, Aug 25, 2010 : "...as the new, highly capable and technologically-advanced F-35 comes into service. It is the best plane our Government could provide our Forces, and when you are a pilot staring down Russian long range bombers, that's an important fact to remember."

Airshow MacKay : "On the eve of Barack Obama's visit to Ottawa, a Russian jet approached Canada's Arctic air space and had to be turned away by Canadian warplanes... fighter planes and world-class pilots that know their business and send a strong signal that they should back off and stay out of our airspace."

Steve 'Spaceman Spiff', Feb 28, 2009 : “ increasingly aggressive Russian actions around the globe and Russian intrusions into our airspace. This government has responded every time the Russians have done that. We will continue to respond; we will defend our airspace.”

Sheer vaudevilliany, of course, all of it.

Two weeks prior to Soudas showboating about "staring down Russian bombers", Russia and NORAD were wrapping up a 3-day joint exercise that had been three years in the planning.
Pictured are Canadian Forces Col. Todd Balfe, deputy commander Alaska NORAD Region, and Russian Air Force Col. Alexander Vasilyev on board Fencing 1220 for VIGILANT EAGLE :

"a joint 3-day exercise designed to establish clear communication processes that would allow the two forces to work together during a real crisis.

In the scenario presented by the exercise, a B-757 jetliner, simulated by a Gulfstream 4 jet, signaled to authorities on the ground that it has been hijacked. NORAD F-22s and an E-3 Sentry Airborne Warning and Control aircraft scrambled in response and followed the track of interest across the Pacific and handing it off to Russian Federation fighters as it approached Russian territory. On the second day of the exercise, it was done in reverse, with SU-27 fighters making the hand-off to F-22s as the “hijacked” aircraft approached Alaska."

A January 2010 cable says Harper cautioned NATO chief Anders Fogh Rasmussen that the alliance has no role in the Arctic because "Canada has a good working relationship with Russia with respect to the Arctic" and a NATO presence "could backfire by exacerbating tensions."
.
Posted by Alison at 12:44 pm
Email ThisBlogThis!Share to TwitterShare to FacebookShare to Pinterest
Labels: AirShow MacKay, arctic sovereignty, Dimitri Soudas, F-35 fighter jet, Harper, NATO, Norad, WikiLeaks

Why am I not surprised?

I remember having a conversation during one of the last Arctic "interceptions" with a relative who was convinced that if our CF-18s hadn't been there to turn them away, the Russians probably would have bombed us.

Another point that is not being made often enough is that the Bear bombers making these patrols are of 1950s vintage. I really don't think brand-new stealth fighters are necessary to keep them in check.

Really. And no one in the media thought to look this up for themselves and let us know about it.
Thank you once again for your excellent reporting.

Sixth Estate : Confess I know nothing about fighter jets.

But Soudeas and Airshow's theatrics aside, interesting that Steve sees NATO countries as a possible economic threat to Canadian sovereignty in the arctic but not Norad. And that he's done sfa about it.

Anon : Thank you kindly but this post is really just a rewrite of one I did at the time : The joint air traffic coordination partners are coming!.

btw NATO also does these joint manouvers with Russia.

The F-35 isn't even an air superiority fighter. That's the F-22's job. It's what another blogger called a "bomb truck," a tactical fighter bomber that would be very useful if we stayed in Afghanistan forever, for instance.... hmmm.....