On Saturday I posted a screencap of CBC's 'senior business correspondent' Amanda Lang as keynote speaker at the upcoming CORE-Outsourcing's 8th Annual Conference : Fast Forward - What's Next for Outsourcing?.
CORE displayed Lang's bio above the logos of their 'Corporate Sponsors' - which unhappily included iGATE.  My link to that page subsequently went down over the weekend: 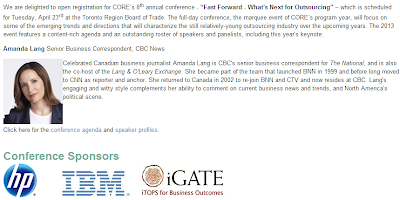 "Oops! The page you are looking for cannot be found."

This seemed most unlikely for an "annual global conference" about to open in 6 days so I fixed it. It went down again. Go ahead - try it yourself. It's gone.

CORE's helpful Oops! advice to try looking for the page in their menu links brings up no mention of the conference at all. 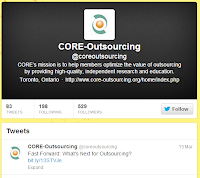 Their most recent twitter entry on March 13 which provided a link to the conference is also "Oops", while links to it from various conference participants like Everest Group are also pining for the fjords.

In the course of looking for it, I ran into a CORE page from their 2011 conference advertizing Lang as the Conference Moderator : 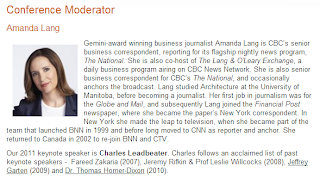 as well as iGATE's proud corporate  sponsorship there in presumably happier days : 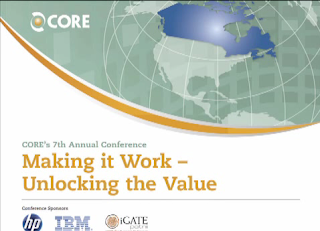 But the page at CORE-Outsourcing's 8th Annual Conference : Fast Forward - What's Next for Outsourcing? , featuring Lang and C.J. Ritchie "Assistant Deputy Minister of the Strategic Partnerships Office, Government of British Columbia, which provides leadership to BC’s $5.8-billion portfolio of strategic outsourcing contracts" is nowhere to be found.

Did they just go indoors?  Are they making corrections?
All I know is that CBC has visited that Creekside page upwards of 20 times in the last 24 hours.

If anyone knows what happened, please let me know. After all - it's CORE's 8th Annual Outsourcing Conference - practically a Canadian tradition now.

2pm Update : Frank at Back of the Book found another way in :
http://www.core-outsourcing.org/events/event-directory/Archive/Conferenc2013/index.php

Thursday update from comments below :
Saskboy said : Ombudsman tweeted me that Lang is off the CORE event.

Mystery Solved !          CBC Ombudsman, May 3, 2013
.
Posted by Alison at 5:47 am
Email ThisBlogThis!Share to TwitterShare to FacebookShare to Pinterest
Labels: Amanda Lang, banksters, BC gov, CBC, CORE, down the memory hole, iGATE, outsourcing

Some people seem to be operating under the naive assumption that by altering web pages, you alter reality. I don't think it works that way.

I used to think Amanda Lang was a journalist, but I was wrong. She is a huckster, selling extreme capitalist snake oil.

What kind of morons do those morons think we are???

I believe standard journalism practice is to disclose if you have a conflict of interest regarding a news.

We know Kevin O'Leary uses the show as a promotional vehicle for his business ventures. Now we know that Amanda Lang is no better.

And this conference is not exactly welcoming to anyone who might be, say, a real journalist:

The CORE conference has been entirely cancelled because several speakers, including Lang, pulled out. Apparently Lang was instructed to do so by the CBC. CORE also decided that it would not offend its various corporate sponsors by continuing with even a pared down conference. Apparently CORE's members do not want outsourcing in the news at all