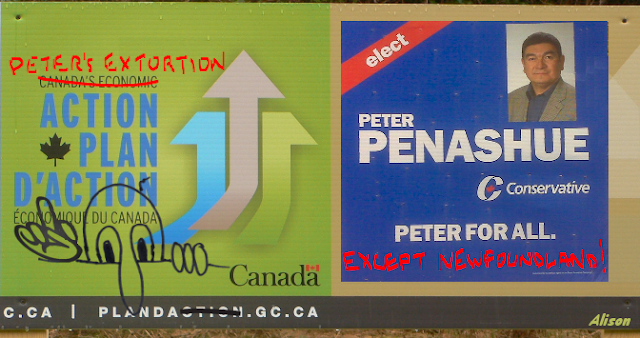 Former Minister of Intergovernmental Affairs Peter Penashue ran for office in 2011 under the campaign slogan "Peter for All". Winning that election by just 79 votes, he resigned his Labrador seat last month over an ongoing Elections Canada investigation that found his campaign overspent and accepted illegal donations.

So it was a bit of a surprise when he was back on the campaign trail last week bragging to his constituents that he held up a Newfoundland project for six months in order to get $85-million in funding for a highway for Labrador.
Intergovernmental Affairs Minister for All indeed.

He also claimed that when re-elected and re-installed as a Con cabinet minister, he would be instrumental in boosting pork to the Canadian Forces Base in his riding.

Tony Gazebo won his Parry Sound-Muskoka riding in 2006 by a mere 28 votes.
In 2008, following election endorsements from local mayors on his G8 slush fund tailgate committee which he used to misdirect $50-million in public funds intended for border infrastructure to gazebos and flower pots in his riding, he increased that vote margin to almost 11,000.  A pretty good deal at $2,290 per vote.
Now he's President of the Treasury Board.

So however laughable it may seem to us at the moment, there's still a glimmer of hope for Penashue and his Economic Extortion Action Plan buy-election.

Clement should be in prison.

Even before amendments . . . the slogan "Peter for all" sounds vaguely pornographic to me.

PLG : Yeah. it's the Peter Principle.
Right away I was reminded of Steve's strong stable rock hard throbbing majority mandate ;-)

If I was living in this riding, I would not vote for him because of his blatant pork barreling.