The invisible hand of the market outsourcing


"A single mom, an experienced IT worker, couldn't find work for seven months. She heard one of the Indian firms had a project going at one of the banks here so she asked the manager who she knew who was here from India to hire her to oversee it. He said he'd think about it. Then she says he called back to say he would give her the job if she would agree to kickback $8 an hour from her salary to him - a cash commission, he called it. She took the deal because she says she'd rather pay him to work than not have the job."

So Canadians are now having to pay off the insourced scam artists who cost them their jobs to get work at all, even as foreign temporary workers have increased 700% since 2001 and Ottawa is currently inking a trade deal with India to increase labour mobility.

"Intra-company transfers in the vast majority of cases are a completely normal part of international commerce ... The obligations we have have for intra-company transfars are often hard-wired into trade agreements."

"The program's intent is not to replace Canadian workers ... We had concerns with respect to what was happening with iGATE and the government acted extremely quickly to begin an investigation to make sure that those labour market opinions were being used appropriately." 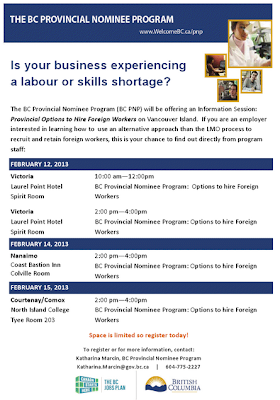 Meanwhile in February this year the BC Government Labour Market and Immigration Division was holding classes on how to do it :
(italics mine)

"Is your business experiencing a labour or skills shortage?
If you are an employer interested in learning how to use an alternative approach than the LMO process to recruit and retain foreign workers, this is your chance to find out directly from program staff. "

I guess the BC gov program staff is pretty good at it.
At the now cancelled April 2013 CORE-Outsourcing's 8th Annual Conference : Fast Forward - What's Next for Outsourcing? sponsored by IBM, HP, and iGATE, one of the listed presenters was
C.J. Ritchie, Asst Deputy Minister,
Strategic Partnerships Office, Government of British Columbia,
whose CORE bio advertized provided "leadership to BC’s $5.8-billion portfolio of outsourcing contracts". 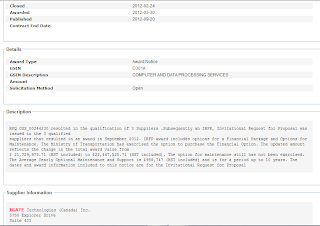 And a year ago, the Ontario Ministry of Transportation finalized a $22-million deal with iGATE to provide IT workers for its Road User Safety Modernization Initiative, the department in charge of "road user safety, provincial highways management, and transportation policy and planning including transit."


Last month iGATE hired a lobbyist to lobby :
on "the Temporary Foreign Workers Program and proposed government changes to the program."

We'll see how well they do with that.

Northern Reflections : One May Smile  and Smile

with files from : Boycott Royal Bank of Canada and Outsource Canada
.
Update : Wednesday, May 8 :

A Star investigation has found 90 per cent of the $2.4 billion paid out in the past decade comes with no description of the work done — and more than a dozen departments refuse to provide details when pressed.

So iGate plans to back fill all the job cuts to government departments with cheap foreign temporary workers? That's what their lobbying efforts imply. Was it KPMG who was hired by the Harper Regime for a multi-million dollar project to assess the civil service for inefficiencies - this after the civil service had been mandated to undertake program review in all federal departments? Maybe that was a wonderful private sector solution that no civil servant in their right mind would have ever recommended.

What all the journalists fail to mention when reporting on this is that these workers are not just paid less but the employer does not pay CPP or EI since they are temporary and a whole host of other labour rights are unavailable to them.

I don't even know what to say anymore.

BY : Well, iGATE would need to lobby all those depts to ensure they don't lose any contracts.
We learned two years ago via CCPA that Public Works and Government Services Canada; National Defence and Canadian Forces; Human Resources and Skills Development; and Public Safety and Emergency Preparedness—make up half of all federal government outsourcing :

“Over the past five years, personnel outsourcing costs have risen 79%. While federal departments have had their budgets capped, expenditures on outside consultants have not been touched and remain above $1 billion a year,” says Macdonald.

Was it KPMG who was hired by the Harper Regime for a multi-million dollar project to assess the civil service for inefficiencies...

No, it was Deloitte, an outsourcing corp themselves :
"The member firms of Deloitte provide outsourcing services worldwide, helping our clients optimize the performance of important, but non-core business functions. We provide the qualified staff, technology resources and best practice business processes in areas such as financial back office, human resources, tax and applications management."

employer does not pay CPP or EI
or income tax. That must be a massive saving for them.

I heard Anna Maria's program which included jason kenney and ms. leitch. 'Bout gagged while listening to those two defend the indefensible.

All this falls nicely into alignment with the fresh push against Public Sector Unions, doesn't it?

Like the fat nazi shite in the Notional Pest today. I won't link or quote to it. If you want to throw up in your mouth that's up to you. :-)

Dana : Yes it does.
Unfortunately the benefits of learning what makes you throw up in your mouth don't outweigh the downside of having to slog through NaPo to find that out.
;-)

Bob : Leitch is particularly ghastly. I do wish CBC would call these guys out on their botscripts when they don't correlate to the question asked. Tremonti much better at it than Solomon though.

Hang in there, doublenickel. Same world - we just know more about how it doesn't work now.

Yes ,i do supports Alison for his view on this article.Please impart your views on current situation prevailing in immigration services Canada