A month ago, former MP and Liberal leadership contender Martha Hall Findlay had a piece in the G&M : Northern Gateway : You don't build a nation by saying 'No" in which she echoed Tarsands Minister Joe Oliver in invoking pipelines as "nation-building" projects similar to building the "national railway and the St. Lawrence Seaway".

Nation-building is apparently no longer about bringing people together in economic resilience but now consists of petrocorps getting their toxic unrefined bitumen to China as quickly and easily as possible.

What you may not have known because the G&M failed to mention it is that MHF was writing as a member of an insiders corporate PR group spun off from the Canadian Chamber of Commerce called Partnership for Resource Trade and its website Power of Canada [powerofcanada.ca].

If you want to hear even more about the Canadian Pacific Railway and the Saint Lawrence Seaway as precursors of nation-building pipelines and how the resource sector is the "front lines of environmentalism" - these are your go-to guys.

While you're there you can sign up to pledge your support and add your sig to a petition to MPs : "I believe in the Power of Canada".

As the Canadian Chamber of Commerce put it in a letter to their local branches :


"Through the Partnership for Resource Trade, we want to recruit and empower local champions ... and add your voices and passion to the public debate. In coming days we will provide more tools that can help you and your members become involved in the dialogue.  I encourage you to visit the web site powerofcanada.ca." 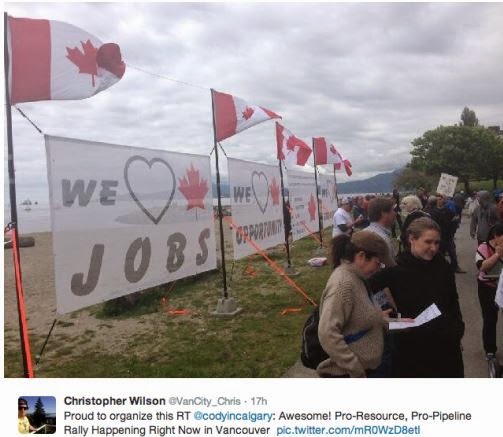 Here's two local champions who took the pledge and signed up at Power of Canada :
Cody Battershill, Calgary, AB
Wyatt Webster, Surrey, BC

As I've mentioned before, Wyatt Webster co-wrote a pro-pipeline op ed in the Vancouver Sun with Christopher Wilson in June where they advised readers to check out their own grassroots website, Canada Action - "Support Northern Gateway", which in turn also signs up supporters - including Bruce Lounds of the pro-pipeline astroturf group British Columbians for Prosperity.

Here Canada Action is seen staging, in Cody Battershill aka codyincalgary's words, an "Awesome Pro-Resource, Pro-Pipeline" counter-protest at the "No Enbridge" rally in Vancouver in May - with massive professional-looking banners and a special surprise visit from tarsands advocate Ezra Levant.

Wilson and Webster state in their Vancouver Sun op ed : "Are we financially supported by a company, an association or a charitable foundation? No."

The first comment under the article is from Cody Battershill aka codyincalgary :


"Why is Canada the only top oil reserve country targeted with such sophisticated, well financed and coordinated opposition?"

Sigh. We're obviously going to have to massively redefine "grassroots" and "astroturf" before this is over.

Canada's still "nation-building": its vast resource once lusted after imperial interests always meant it was gonna take some time. We tend to be fooled--- by runaway bitumen trains, nuclear meltdowns and Arctic ice melting so fast you can practically surf the back-eddy--- into thinking we must be almost there; but because a big chunk has yet to be federated, our task is far from complete,

We also have a lot of other unfinished business before we can call Canada "built": our Constitutional 'building inspector', for example, has given us a pink slip on completing treaties with Aboriginal peoples; it appears we won't be allowed to ignore important structural specs before moving on to new nation-building challenges---like the pressing need to address the opening of the Northwest Passage, to treat with other nations who would avail themselves profitably by shipping through it but with increased risk to our environmental sovereignty.

Nation-building is diverse. Putting too much emphasis on one aspect has downsides for others: the high priority put on securing a Pacific province, for example, led to expediently neglecting treating with BC First Nations until it became very expensive to compensate for both the resources in question AND damages for the neglect.

For a big country like Canada, accessing resources from the interior is obviously important. Canada's always been about canoes, trains, blacktop, seaways and bush pilots. None of these communications, however, can by themselves be interpreted as "priority" or nation-building trump cards: each has to be assessed in context of impacts on other national interests. The St Lawrence Seaway is plainly an important communication network for both Canada and the USA but we must also recognize the negative impact on Canada's Atlantic provinces when they were economically by-passed. For lack of a track road across the prairie, Canada was forced to do something it probably preferred not to do: confederate a non-white polity in Manitoba---the Metis being the only patriotic counterforce to American designs north of the border. To sweeten the pot for Newfoundlanders being solicited for Canadian nation-building, Labrador was snatched from Quebec, the resulting bad blood disaffecting another communication network that might also have been construed as "nation-building: a corridor for Churchill Falls electricity, effectively denied, at Newfoundland's expense, by Quebec---je me souviens, as 't were (one may ask how BC's denial of Albetar's pipeline is any different). "Nation-building" in terms of transportation systems has always been plastic enough to be co-opted for political use; it also has a shelf-life: the Rideau Canal was once a militarily vital piece of nation-buliding but now serves only skaters in winter and pleasure boaters in summer.

The Mackenzie Pipeline debate of the 70s was an example of nation-building by actually NOT building the thing: by blocking what was then characterized by proponents as "vital" for Canada's interests, Canada got a number of overdue treaties done and eventually a new polity entirely, other aspects of nation-building pipeline proponents were unable or unwilling to recognize. Oh, and Canada survived like they said it wouldn't.

A very insightful article, thank you. We must spread this around!

Had a look at the twitter feed of one of the Canada Action dudes. He mostly just retweets Ezra Levant.

It aint nation building it is about corproarte one-world building where locals have no say and are heritics if they oppose environmental destruction for dollars.