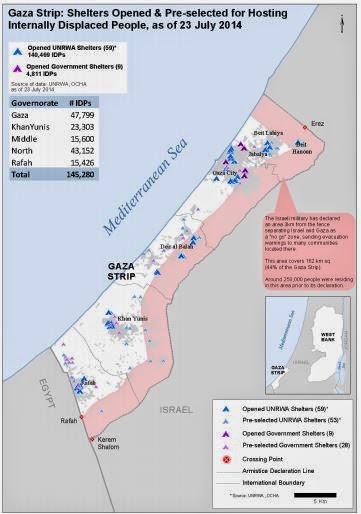 Three days ago, the United Nations Office for the Coordination of Humanitarian Affairs replaced their usual map of the Gaza Strip with one featuring a Christo-like pink skirt inside Gaza.

The printing inside the accompanying tiny info box reads :

"The Israeli military has declared an area 3 kms from the fence separating Israel and Gaza as a "no go" zone, sending evacuation warnings to many communities located there.


Around 250,000 people were residing in this area prior to its declaration."

44% of the Gaza Strip and a quarter million people

The IDF's ostensible purpose for annexing and occupying and bombing an additional 44% of the Gaza Strip is to destroy rocket sites and underground tunnels. 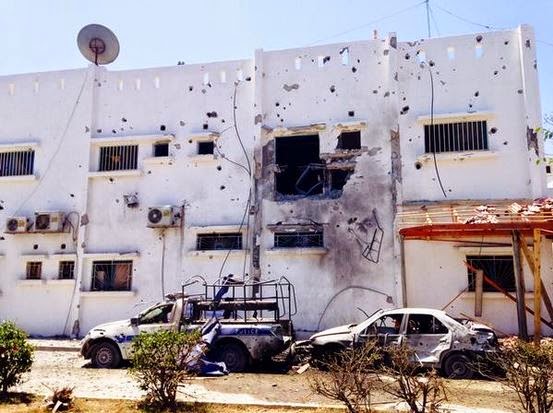 On the map inside the pink "no go" pink zone near the top is the village of Beit Hanoun, where as you can see here, the IDF searched for rockets and tunnels and human shields by shelling the second floor pediatric ward of Beit Hanoun hospital :

“It’s now chaos, the military is shelling directly at us. There are two patients on the second floor and we think they’re okay, but we can’t move them easily as they’re bed-bound. I’m bleeding from a head wound and there’s another person injured. People are very frightened.”

IDF shells also searched inside an ambulance and a paramedic; neither survived.

This same approach didn't really work out well for the entire border town of Shejaiya either, as people return today during the ceasefire to collect what they can and bodies are pulled from the rubble  :

So what kicked off this collective punishment again, as the number of Palestinian dead reaches 1,000?

On June 12, three Israeli teens were kidnapped from an Israeli settlement.
That same day Israeli authorities received a 911 phone call from one of the boys that ended with gunfire and Palestinian security forces reported to Israel that two suspects had disappeared from Hebron within 24 hours of the abduction.

The supposition that the boys were dead was advanced when Israeli authorities found the car in which the abduction had taken place, with DNA evidence they’d been shot.

The information about the gunshots on that desperate last phone call was widely known in the media, but as we reported, the Israeli government issued a gag order against these facts being published. And over the last two-and-a-half weeks of June, the Israelis launched extensive raids across the West Bank, locking down Hebron, supposedly to find the boys. But the major focus of the raids was rooting out Hamas affiliates and arresting them. In fact, the purpose of the raids seemed to be to break up the recent unity government between Hamas and Fatah, which Israel has vigorously opposed.

The boys’ bodies were found on June 30, in a shallow grave in the West Bank; and again the deaths were exploited to punish Hamas.

There were a lot of holes in the story.
Sheera Frenkel was never convinced it was Hamas; neither was Max Blumenthal; and in response to the question a month ago as to whether Hamas leadership or some rogue cell was to blame, an IDF source responded : "I don't think that we know enough to say anything conclusively as of yet."

And that was because their main suspects were from the Qawasmeh clan, a family with a history of blowing up Hamas' attempts to come to terms with Israel.

"Each time Hamas had reached an understanding with Israel about a cease-fire, at least one member of the family has been responsible for planning or initiating a suicide attack, and any understandings with Israel, achieved after considerable effort, were suddenly laid waste. If there is a single family throughout the PA territories whose actions can be blamed for Israel’s assassination of the political leadership of Hamas, it is the Qawasmeh family of Hebron.

On Aug. 19, 2003, after a tahadiyeh was reached between Israel and all of the Palestinian factions, with the support of Hamas leader Sheikh Ahmed Yassin, two suicide bombers blew themselves up on the No. 2 bus in Jerusalem. Some 23 Israelis were killed in the attack, including seven children. All of the passengers on the bus were on their way back from prayers at the Western Wall to mark the end of the Sabbath. Most of them were yeshiva students. The attack put an abrupt end to the tahadiyeh just 52 days after it was announced ... The Qawasmeh family planned and implemented the attack during a cease-fire, which was supposed to have ended the second intifada, a cease-fire that had the support of Yasser Arafat, then-PA chairman, his Prime Minister Mahmoud Abbas and, of course, Yassin, the leader of Hamas.


Possible that while both Hamas and Netanyahu have been driven to this most recent carnage by their more extreme and unhinged "affiliates", both are now hoping to gain an edge thereby.

So today we are all looking at this man : Israeli police spokesman Micky Rosenfeld and his

Too late! Everyone has already eaten the yellowcake.


Operation Protective Edge Yellowcake has levelled cities and murdered over a thousand people to date over what they at least suspected as far back as June 12 had little to do with a PR campaign about Hamas kidnapping and killing the Israeli teens.

Is Mr. Netanyahu the most damaged leader of a first world country? One only needs look at the absolute destruction of Shejaiya (and hats off to the CBC's Paul Hunter for his on the scene reporting from there -I'll hazard to guess there have been calls from the PMO to the CBC Board on this!!) to wonder what he is hoping to achieve (beyond the complete eradication of Gaza!). Remember, this is the "leader" who consistently pushed for an military strike on Iran!!?? I believe he is damaging Israel's reputation and certainly begs questioning about how this relates to any form of justice for the people of Gaza. He has created a climate of fear in Israel. Surely we have learned more about reconciliation than this.

Today IDF claims that one mortar went astray and hit only the empty courtyard of that UNRWA school where 16 or more were killed.

Meanwhile wtinesses say Israel gave them warning then hit the school including the courtyard with 4 shells:

I am not the least surprised, the attack on the schools were deliberate. Harper likely had a hand in that too. After all, Harper did take a planeload with him to Israel.

Harper never, ever does anything for anyone, out of the goodness of his heart. That should be abundantly obvious to all as to how, Harper treats his own citizens giving Canadian jobs to foreigners, his manner towards our Veterans etc. etc. Harper only cares about Harper and what benefits him.

I think much of the world is angry at Israel and their supporters. When the dead Palestinian children were merely collateral damage? The people found themselves, in a deep and terrible anger.

There is a petition going around the globe and likely has millions of signatures by now.

Well, this is lovely.

"In an exclusive interview with The Jerusalem Post Monday, the former MIA division head for the Mossad, Rami Igra, questioned Prime Minister Binyamin Netanyahu’s assertion that the three Jewish teens abducted in the West Bank Thursday were taken by Hamas.

“The fact that he is naming who abducted these kids is more political than based on fact,” he said.

Although Igra believes that there is no current proof that Hamas abducted the three teens, he acknowledged that it is inevitable that the terrorist organization will ultimately oversee any subsequent negotiations with the Israeli government.

“There is no question in my mind that Hamas will lead the situation, because at the end of the day no other organization could,” he said. “Gilad Schalit was not abducted by Hamas."